Turning Art into an Entertainment – through his variety of works 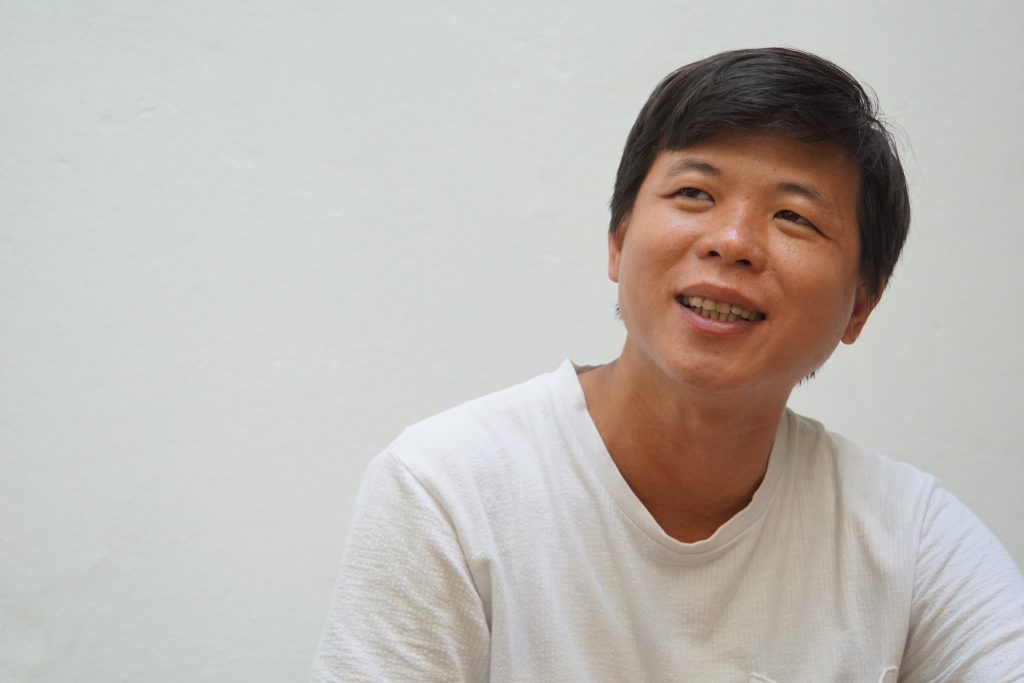 What are Cambodians?
If you ask a foreigner, the answer will surely fall into these three patterns. "Those who created the great Angkor Wat monuments," "Those who survived the atrocious experiences of the Pol Pot era, which are rare in human history," and "Those who are recovering from civil war and poverty."
But all of those are outdated and 90’s images for the people who live in the Cambodian society today.
Their actual character is more pop, humorous, dry, and realistic.
In Khvay Samnang's artwork, we feel somewhat light and humorous Cambodian youth’s mind, while focusing on old and new social issues. Even he tries to change the resentment and sadness into an entertainment and carry to us in an easy-to-understand way.
For example, “Where is My Land?” (2004) is a collaborative work with Nget Rady, a dancer. In Phnom Penh, large lakes that once existed were reclaimed to secure land for development, and residents were excluded. This redevelopment became a major social problem with opposition movements by residents. He expressed this problem through the actually collapsed ground, buildings, and the bodies of dancers that "stick" to the ground and marshes.

In addition, his series of work, “Samnang Cow Taxi” is a performance in which the artist himself draw a two-wheeled cart around town, wearing a hat modeled on buffalo horns. Although the specific theme of the performance may change depending on the location, however it is in common that he raise a question to the values of modern society, which are practiced only in terms of efficiency and convenience by a buffalo and a two-wheeled cart, which remind audience of traditional Cambodian agricultural work. He said that he enjoyed a dialogue with Japanese people on the street while pulling his two-wheeled cart, offering people a ride to the cart, and taking pictures together in Asakusa, Japan.

Samnang was born in 1982 in Svay Rieng province on the Cambodian and Vietnamese border. However, when he moved to Phnom Penh when he was two years old with his family, so he can be said that he was actually raised in Phnom Penh. His father was a plumber and his mother was a market seller.
He wasn't good at studying. But he loved paintings, and often painted pictures on the walls of his house. In school, there was no class for art to try his talent, so his talent remained buried. Though, Samnang just continued "what he loves." "My family was poor, but my parents let me do what I wanted to do without imposing anything on me." It would be a major factor that prevented his talent from being crushed.
One day, He draw his mother who was sewing. It became a monochrome abstract painting instead of a sketch. When he showed it to his mother, "What an ugly picture! I don't like this” She said and disliked his painting. But the painting was sold for $300. "Since then, I showed my work to my mother, and I was convinced that the more she hated it, the more the work would be sold.'" Said Samnang and laughed cheerfully.
Probably Samnang had known that the comfort is not the art he wants. That whether there is anything in it that shakes the mind of what you see is the essence of art, and that there are people in this world who understand it.

Works of Samnang mix a variety of materials and techniques, including collaborations with dancers and installations, photos, and videos that use natural scenery. What is common, however, is "field-oriented."
He lived in a minority village in the western state of Koh Kong province for a year, creating works about humanity and environmental pollution. When the 1960s’ building in central Phnom Penh, commonly known as the "White Building," was demolished, he went to the site many times and photographed the residents and their rooms. The photo shooting was rejected many times, but "As I talked with them, we had a stronger feeling that we had to leave it on the record. I told them that and persistently asked for their understanding." He said.
"I want to learn. I want to know. I want to know more and more. In order to get the work to speak well, I have to know more. So I go directly to the scene, meet people, talk, touch, smell, and know. Not from the stories of someone or information on Internet. It's more important to watch with my own eyes," he says.
Samnang says that art is a sort of "word." He thinks it's a special language that can deliver messages to a much more diverse range of people than a single language. That's why he says that technical talent, such as being able to make beautiful things or being able to draw them, is not enough, and it's essential to have the intelligence of what he/she wants to appeal through it. "I want to tell young artists to study first. History, in particular. Knowledge and intelligence are very important for artists to make their art meaningful."
Samnang is traveling around the world with his works. Having a universal language known as art, he is the storyteller of "life-size Cambodia." I am looking forward to the next piece of his work on what kind of methods will be used to irradiate the evolving aspects of Cambodian society.