UuDam Tran Nguyen: A Fusion of Passion and Technology that Links the Past with the Future 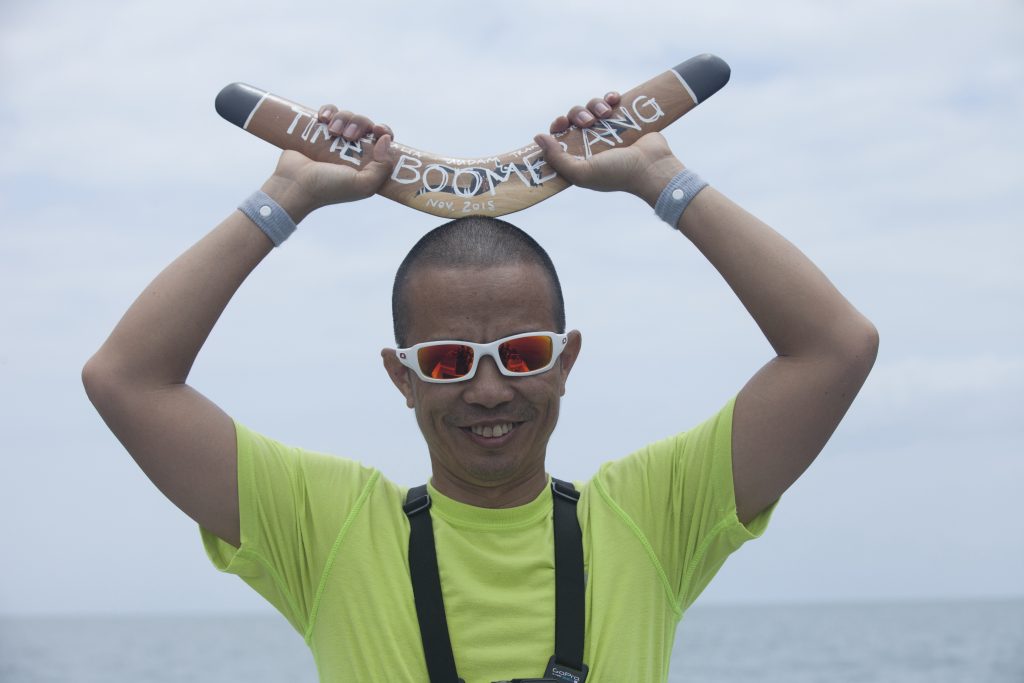 All is copyrighted by UuDam Tran Nguyen my portrait also, but taken by Chloe Callistermon﻿

UuDam Tran Nguyen
Born in Kon Tum, central Vietnam in 1971, he now lives and works in Ho Chi Minh City. After graduating from high school, he studied art in Ho Chi Minh City and the United States. He has presented his movement-based works including video and three-dimensional works based on performance, and interactive projects in which machines for drawing are remotely controlled via the Internet. UuDam exhibited three representative works at the Asia Art Biennale 2021 (Duration: Oct 30th,2021- March 6th,2022)  held at the National Taiwan Museum of Fine Arts in Taichung, Taiwan.

A humorous look at the cost of economic development

While Vietnam's growing economy has seen the arrival of many cars, the majority of the country's population still uses motorbikes to get around. Day and night, the streets of Ho Chi Minh City are filled with people on motorbikes wearing helmets and masks. This is a visually interesting sight- as if they are hero cartoon characters, but behind it lurks the social problem of air pollution caused by exhaust fumes. UuDam's works for the Asian Art Biennale 2021 are all based on the motif of ordinary people riding motorbikes.

“Serpents Tails" is a huge sculpture videos installation in which hundred of motorbikes connected by long, thin rubber balloons inflated by exhaust gases through out many locations in Ho Chi Minh City. The video consists of five parts based on these world myths: "The Churning of the Sea of Milk”, "The Trojan Horse", and "The Tower of Babel"... The colourful ponchos, the dancers holding plastic tubes filled with exhaust fumes and the unique fashion of the riders playfully depict the everyday life of the motorbike society. On the other hand, the final scene in which the motorbikes surround the Tower of Babel can be seen as a metaphor for the collapse of the world due to their own exhaust fumes.

“Contemporary Saint Giongs" combines the classical mythology of Vietnam and the European Saint George – The Dragon Slayers with the social realities of the 21st century. The ordinary people of today's society are compared to the Vietnamese hero Saint Giongs, who lived around 1690 B.C. Here, Honda motorbikes replace horses, plastic helmets replace steel armour, the artwork represents the fight against economic inequality, environmental pollution, and invisible viruses.

After living in the United States for more than 15 years, UuDam returned to his home country Vietnam and came to strongly realize the cost of rapid economic development. As an artist, he has been engaging his work with the idea to “raise the social issues that lie behind development”. “Humans cannot control everything”, he says, warning against human hubris that accompanies development.

Embodying the contemporary history of Vietnam

UuDam was born in 1971 in Kon Tum Province in the central highlands of Vietnam during the Vietnam War. Influenced by his father, a painter, writer and poet, UuDam showed an interest in art from an early age. Although he did not remember his father teaching him art, he spent his childhood drawing on the back of typing paper on which his father's short stories and poems were written.

After the end of the Vietnam War in 1975, his father was sent to a re-education camp for 4.5 years because he was an officer on the other side. UuDam himself studied sculpture at the University of Arts in Ho Chi Minh City for a time, but in 1994, he emigrated with his family to Oregon, USA as refugees. He received a BA from UCLA and an MFA from the School of Visual Arts in New York. He expanded his practice to include video, photography, and performance, which laid the foundations for his career as an artist.

From childhood to young adulthood, he grew up in the socialist country of Vietnam, but circumstances beyond his control, including the backdrop of the cold war, gave him the opportunity to study art in the United States. Having lived in a communist country, and then in the capitalist world, he says that he is able to create his work with a broad perspective and sense of balance. UuDam himself embodies the complex history of Vietnam, a country deeplyinfluenced many international forces through out her times.

A combination of technology and teamwork

UuDam is also concerned with the balance between detail and scale in his work. This is made possible by a team of technical members who are able to maximize the latest technology and performance. UuDam himself is responsible for everything from the selection of participants to the collection of production costs and sponsors. In order to give shape to the expression he is aiming for, he runs his own team with the perspective of a business owner.

“License 2 Draw” (2014) allows viewers to participate in the creation of  the work of art at a long distance through the operation of an application on a smartphone or tablet. When he was living in the US, he became aware of the bombing of Afghanistan and Yemen and wanted to raise the issue of how people can be killed by remote control weapons. He conceived the idea in the US and worked with engineers in Ho Chi Minh City in Vietnam to develop the system and complete it. License 2 Draw debuted in Japan and won him the Jury prize for the 18th Japan Media Arts Festival in 2015.

His ongoing project, “Time Boomerang” (2014- ), explores the territorial dispute over the South China Sea. It is a complex mix media installation and performance art in which the artist set out to visits five continents and drops the fingertips of a his bronze hand into the adjacent seas.

UuDam hopes that the ambitious Time Boomerang project will be "a platform for dialogue for everyone" as it deals with the delicate tensions between Southeast Asia and China, and Japan and China and America. At present, up to 4 of the 8 phases have been completed. He is currently planning a trip to Africa and Antarctica, which he hopes to complete in 2025.

Even in the wake of the COVID-19 pandemic, his work still travelled the world. For the Asian Art Biennale in Taiwan and the Asia Culture Center in Korea, he packed and sent out his works during the most severed lockdown (from August to September, 2021) from Ho Chi Minh City. With a clear axis as an artist, he continues to confront his work with a sharp point of view, passion, and smart ideas