Yohei Yama : Like a Sand Crest Formed by Waves 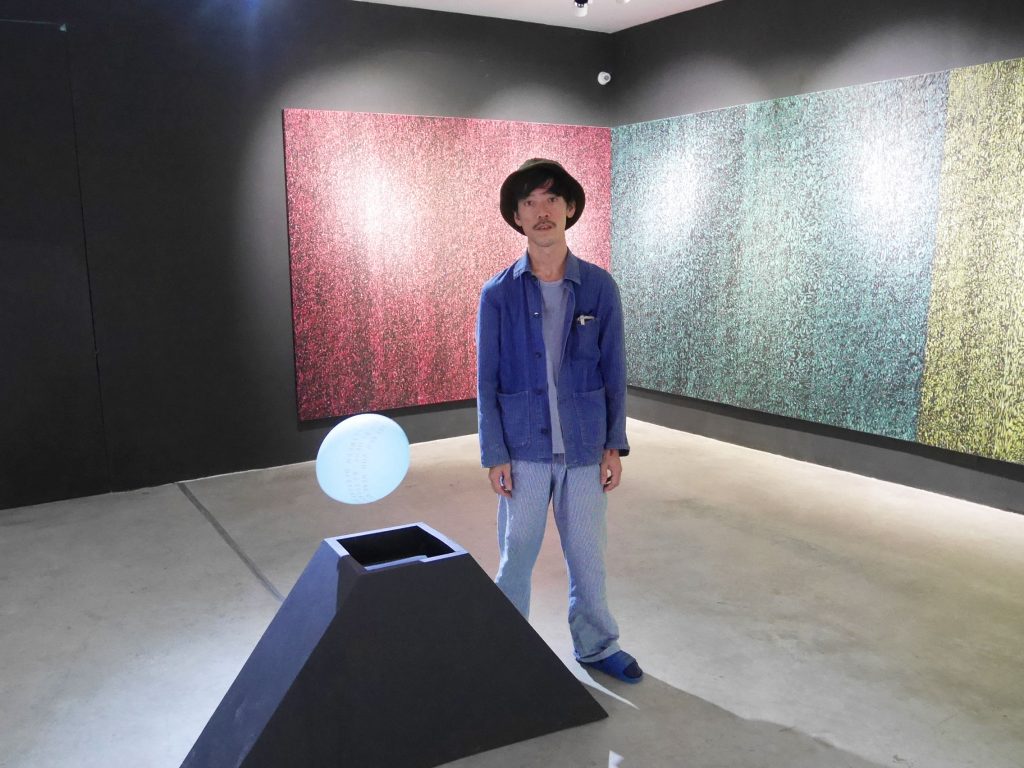 Yohei Yama is a Japanese contemporary artist who lives in Ho Chi Minh City. As a photographer, he did not originally aim to paint, but he has a history of becoming a painter in a mysterious way.

I would like to look back on Yohei Yama's creative world together with the appearance of the venue of the solo exhibition 'PHENOMENON = (TIME X SPACE)' held at VIN GALLERY, Ho Chi Minh from 28th June to 27th September 2019.

His creation was a testament to the fact that he now exists in nature, linking the moments of the present, the past, and the future, just as if he painted patterns on the sand, whenever the waves come back to the beach.

It is the Stars that Make Up the Galaxy

His works are painted using many layers of minimal lines. Dots are scattered over them like the stars that make up the galaxy. These dots and lines look the same, but each one is a collection of things made of different personalities. Like the light of a star reaching from the direction of tens of thousands of light years, we, who see it, are also inhabitants of the stars, looking at the light of a star that may have already gone out.

In addition to the paintings, triangular objects were placed at the entrance hall of 'PHENOMENON = (TIME X SPACE)'. Reminiscent of a triangular pyramid, these triangle were also minimal, consisting of the smallest vertices. The front and backs were painted in different fluorescent colors, and passing through this triangular object means that it is now a world different from the outside world. That is the role of Torii (the gateway to a sacred space).

Yohei Yama was originally a photographer. The reason why he turned into a painter and started to live abroad was that he tried to join the world- famous photography festival held in Arles, France, about a decade ago. If he showed his photos abroad to foreigners, he wondered what kind of reaction he would get. When he came to think about such things, he could not stop acting on his impulses, and he surprisingly went to Arles alone.

However, during the festival, where photographers and audiences gathered from all over the world, he bravely visited there without any reservations, but unfortunately he was not given the opportunity to present his works, nor was he able to stay in any hotels.

While sleeping in a park at a loss, he used his spare time to start painting on the street. Then the number of spectators gradually increased, and the pictures that were depicted just for fun began to sell. As paintings began to sell and became popular, people in the industry who recommended exhibitions appeared, and while his solo exhibition was held and appreciated, he finally decided to work as a professional painter in France.

Afterwards, he developed solo exhibitions mainly in foreign countries, and now, partly because of the connection with VIN GALLERY, who recognized his paintings earlier than before, he has now moved his base to Ho Chi Minh City in Vietnam to engage in creative activities.

An exhibition hall featuring works of color that cannot be considered Japanese. Galaxy, Torii, and floating balloons. It was a unique composition where it can be said that the whole venue was a work of his own. Next time, we will be waiting in anticipation for a chance to see Yohei Yama's new work at even larger venues.