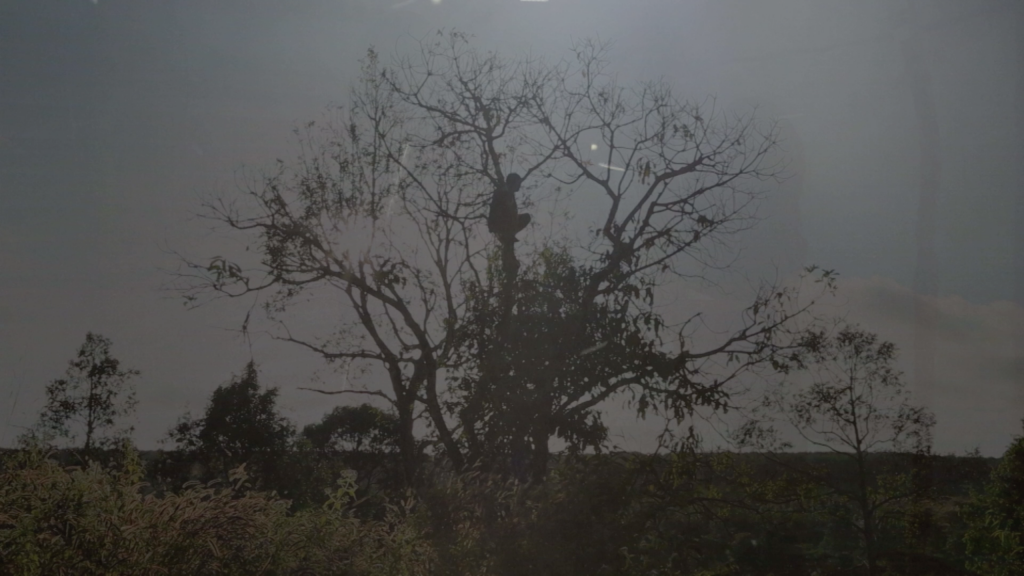 The installation ‘Across the Forest’ is a complex perspective on the Central Highlands of Vietnam. Confronting the mighty nature, but not wanting to be swallowed by it, Truong Cong Tung deliberately spreads many layers of images to filter out the visual power of the landscape. Avoiding stereotypical depiction of the exotic aesthetics of this land, Tung uses the moving image as “performative archiving"1 – the term that art historian David Teh applies to artists, filmmakers, and other individuals using the moving image to archive an entity, yet allowing that entity to vary. The entity moves away from “stilled materialization”2, in other words, it is not objectified with consistent features to passively remain in the past. Specifically in this work, through four animate frames, Truong Cong Tung does not record the plateau territory with a desire to create any historical records for future nostalgia. His depictions are of fragmented scenes happening simultaneously in context: the hands gleaning rubber latex; miscellaneous things like a basin, an iron sheet, a jacket hung on a tree to scare off birds; family members watching TV, burning fields, digging, praying, sleeping. These are all incorporated into surrealistic pictures of nocturnal dreams: lightning flashes, mayflies becoming ghostly bodies of sparkling lights, or cityscape spectacles. The space is immersed in the image of unstoppable flying ants and the bizarre sounds of insects, thunder, howls, and other distorted sounds collected from documentaries about this area, musical mixes, etc. All things and happenings are present in calmness as they are inherent in the lives of people and nature here. At the same time, the ambiguity of the performative image and sound implies that the state of serenity becomes uncertain, as if this order could be disrupted. The combination of the moving images with objects including drilled soil blocks and scattered poems in the installation space creates a fictitious mise-en-scène that escapes from reality in order to think about reality. Perhaps because the reality has been eroded more than how we imagine the magnificent plateau.