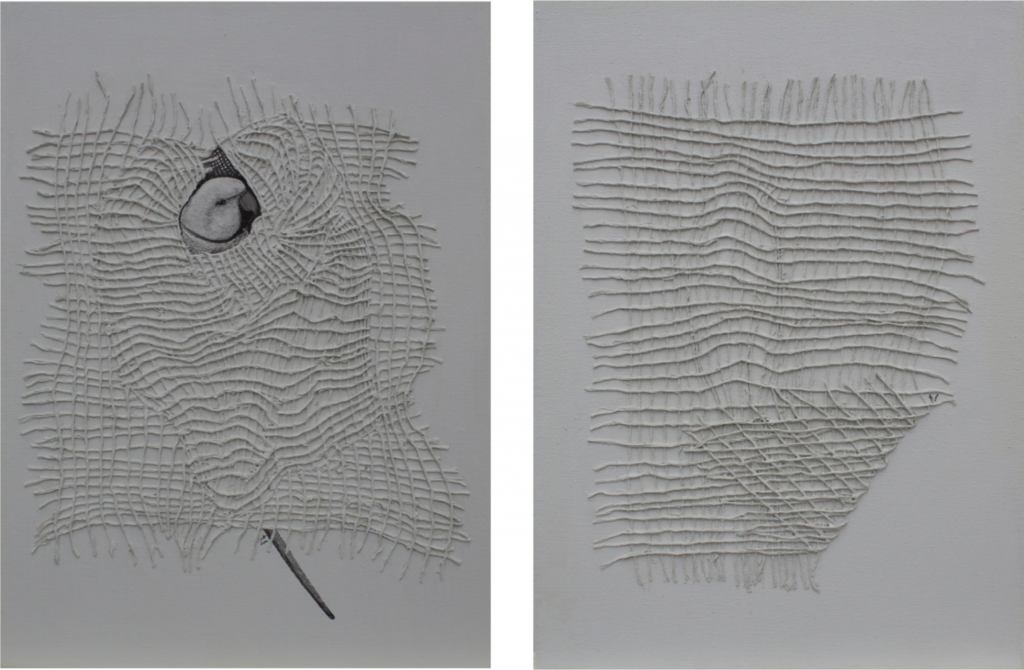 Firi Rahman presents his latest exhibition including work on canvas and cloth as well as installation. In his most biographical exhibition to-date, he delves deep into the subjects of loss and reminiscence. Using his parrots as a vehicle, the tactile and delicate nature of these new works narrate the story of an intensely emotional journey.

In addition to being a professional artist, Firi Rahman is an animal enthusiast and advocate. In previous showcases at Saskia Fernando Gallery he has highlighted the contentious relationship between humankind and the animal kingdom. His work has questioned the rise of endangered species in Sri Lanka, and has explored the similarities between exploitation and cultural tradition. He is particularly interested in the interactions between animals and urban environments, and the responsibility societies share in protecting biodiversity. In Enclosed, Firi grants us intimate access to where his societal activism stems from. While these examinations were previously presented in a hyperrealist pointillism, the current showcase is a significant departure in terms of narrative and technique.

A few months prior to the first lockdown caused by the ongoing pandemic, the artist’s father passed away. In addition to functioning as a carer and attending to his father’s needs, Firi also lived with several birds and cats, and still continues to do so. Unfortunately, his father was not the only loss to the household; their oldest parrot died around the same time. Firi found himself attending to both family members on what would be their deathbeds. It was during the first confinement that the artist was able to confront and process all the emotions from these deaths. It was through this difficult process that he conceived the ideas for the Enclosed exhibition.

Although produced in the aftermath of the curfew, Enclosed emerged from a period of deep reflection. This showcase, keeping in theme with his sombre, monochromatic style, speaks of a close understanding of subject matter and choice of material. The artist attempts to develop the nuance between life and death, particularly in terms of how objects and spaces embody a constant shift between absence and presence. The title Enclosed is derived both from the experience of being confined as a carer, and to being confined by the pandemic. In addition to this, the artist found a transformative solace in the metaphorical connection between the birdcages and his own house. The birds themselves were going through a cycle of depression, self harm - by plucking their own feathers - and depriving themselves of sleep. Firi’s own emotional trajectory similarly moved from a grave sadness and vulnerability to an acceptance of this ‘new normal’ in a pandemic-ridden world.

This showcase was realized through a close examination of the numerous degrees of confinement that already existed within his home. Although moving away from his reputable pointillism, Firi retains a hyperrealist grasp of material as he handles the cotton thread that is featured throughout this exhibition in the form of bird cages. The depicted cages rest on the surface of each picture, implying that this additional sculptural dimension represents a perspectival understanding of the situation. In particular, one can imagine the domes of each birdcage resonating with the architectural design’s original intention - to amplify the sounds of the speaker in the center of the room so its voice may be carried equally around the interior space. A house filled with birdsong and playful phonetic mimicry during a lockdown may have been comforting, particularly so as it helped the artist in processing his complex emotions.

As the creative process develops throughout this series, the birdcage becomes a blanket which in turn becomes a funerary shroud, the process completing itself ultimately as an abstracted composition, where material form is considered on its own timeless terms. Perhaps this refers to hope and faith in the afterlife, where the artist’s memories of his loved ones attain a sense of closure. A silhouette of a bird inhabits a cage, its memory present as much as anything else that may take its place.

The artist used the lockdown period to reflect on the emotional and spiritual processes that drive his creative and humanist energies. What emerged out of this process was a careful handling of reality that merges the personal loss of family - both human and animal - and the universal experience of boundless loss as a result of the pandemic. In time, Firi’s investigation of how memories inhabit objects and spaces will draw attention to the legacy of a disappearing animal kingdom and the lasting imprint it will have left on our collective consciousness.

Firi Rahman was educated at the Foundation of Art and Design at City and Guilds at Manchester College UK. His body of work consists of hyperrealist drawings, wherein he prefers the elegance of black ink pen drawings to evolve precise and substantial textures on paper within the spectrum of black, grey and white. After completing research on the subject of extinction accompanied by his own advocacy against the increase in endangered species in Sri Lanka alone, he began work on drawings of animals that depict their story within markings and the illustration itself. Moving away from direct representation into a narrative of purpose the artist combines the story with the movement and character of his subject, using detail to create a seemingly tactile creature. As a Malay artist based in Slave Island, Rahman immersed the fields of conceptual cartography in his latest series. On large format, he unfolds a partly historical and fictitious view of Slave Island to the spectator. Although his intentions are rather personal besides historical research, he follows the tradition of artists as historiographers. He spotlights threads of multiple historical narratives running through Slave Island, making it an unique space in Colombo’s urban historical identity.

Education：
2012 Foundation in Art and Design at City and Guilds, Manchester College, UK