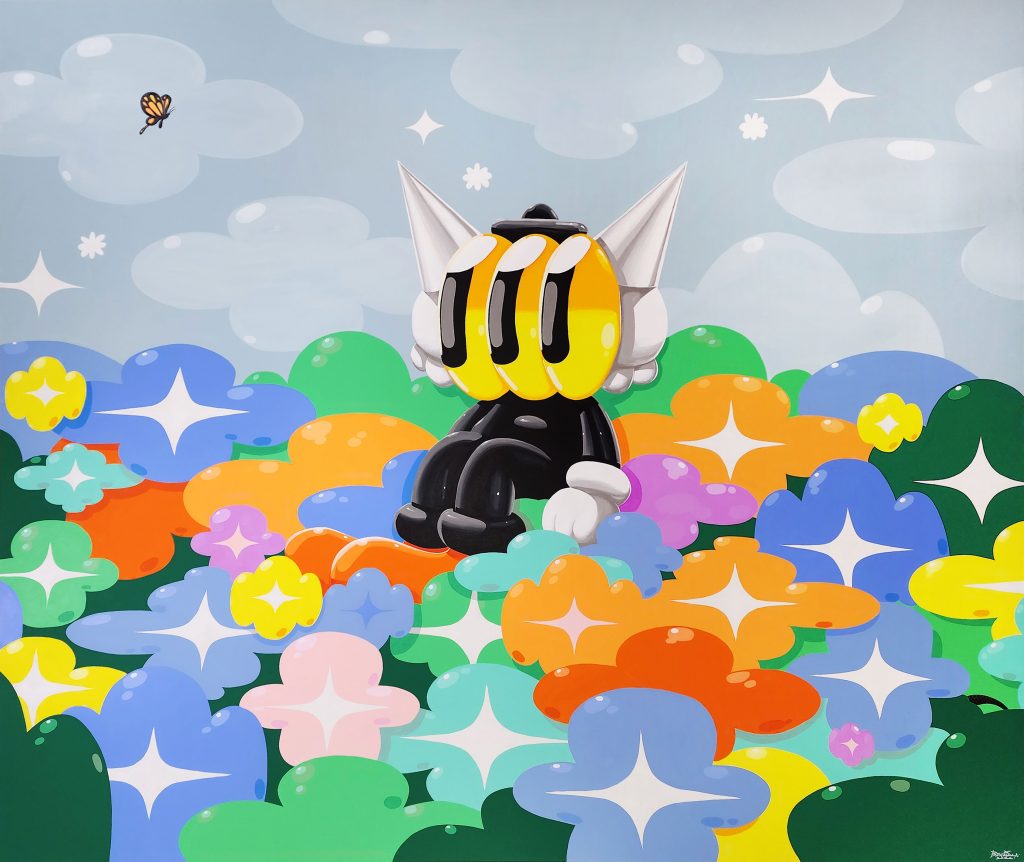 From Street art to new pop art to the gallery temple.
Street art is a temporary intervention, as it is subject to changes, weather and urban transformation; it disappears or overlaps with other art, as does every aspect of contemporary culture. It accompanies the observer's eye in its daily movements, restoring meaning and visibility to places otherwise abandoned or simply forgotten by the gaze and routine.

The artists on show are now part of an international iconography and urban culture. They already have become objects of interest to collectors and galleries.

From the most cutting-edge Southeast Asian art scene, in a path that winds between the cities of Manila, Jogjakarta, Ho Chi Minh and Bangkok they play with their works, interacting perfectly with urban surfaces while at the same time penetrate with ease the temple of the galleries.

In their images they often use characters coming from Japanese cartoon iconography or comics aesthetic, creating playful interactions in a remix of urban history and culture, touching upon themes such as the vulnerability and strength of the human being and the passage of time.

Benzilla
Born in Bangkok, Thailand
Parinya Sirisinsuk graduated from Fine and Applied Art Bangkok University, Thailand. His artwork is inspired from Street Art, Pop Culture, Mythology and Sci-Fiction
He’s present a concept by the 3 eyes character named “LOOOK” an alien who’s came from nowhere and live with us to see how’s this crazy world going and present by combination of craft painting, spray painting and graphic art.

Bjorn Calleja
Born in 1981, Manila, Philippines
He is a Filipino contemporary painter and interdisciplinary artist. He earned his BFA from Far Eastern University, where he later became a part-time lecturer. Aside from exhibiting his work, his early career involved corporate jobs and stints as a graphic designer. He also co-founded Design ‘Other Things’ (2012-2014), a design studio that employed a team of visual artists.
Calleja's work draws on identity, spirituality, art, general and personal history, and everyday politics, utilizing perspective and a play of scale as metaphor to how we as humans affect the world at large. His paintings, sculptures, installations, and animations are heavily influenced by 80’s and 90’s popular culture, kitsch, the internet, and the aesthetics and textures of Manila’s landscape.

Geremy Samala
Born in 1994, Manila, Philippines
Graduated from Far Eastern University with a degree of BFA Advertising Arts in 2016. Since graduating, Samala went on becoming a full time painter and has been participating in various exhibitions locally and internationally since 2015. Samala dominates his works with the ecstatic pouring of physical energy from action painting — they collide with abstraction techniques that use tools such asgrids and stencils in plotting fragments of universal elements such as time, space, and illusion in an otherwise flat surface. Samala’s visual intervention produces a discourse on image production, where the artist’s disposition becomes the force that arbitrates between the physical and mental tasks involved in art-making.

Line Censor
Born on 13 May 1982, Lopburi, Thailand
Kiatanan Iamchan or we know as Line Censor was born in 1982. He achieved a Bachelor and then Master of Fine Art Degree (Painting) From the Faculty of Painting, Sculpture and Graphic Arts, Silapakorn University. He prefers to portray complicated modern matters, together with being inspired by the refinement of traditional Thai art, the art of narration, Buddhism and exquisite characteristics of traditional thai painting, which he applied to create his own distinctive style, portraying his attitude to the modern world.His work is displayed in Europe and Asia ,national and international galleries, and belong to both public and private collections. At present Kiatanan’s NFT works are display on international platforms, such as Foundation and Opensea. Moreover, He is the first Thai artist who has participated in an international exhibition named “Super Rare”, on which original Thai contemporary paintings have become priceless digital works of art. Most of the works shown on this platform are in the high price range offered by international collectors.

Muklay
Born on 7 january 1993, Indonesia
Muklay is a visual artist residing and working in Jakarta, Indonesia. Muklay received several awards including being named as one of Forbes Indonesia 30 under 30 2020, 3rd place on Indonesia Art Awards 2015 and best artwork at Nalar Sensani Seni 2015 Galeri Nasional Indonesia. His solo exhibitions include Perplexity Relation at SH Artspace, Ginza, Tokyo 2020 and See Something Strange at Artotel Thamrin, Jakarta 2016. Muklay thinks collaboration is exciting because he get to meet new people.

OGGZGOY
Born in Jombang, East Java, 1992.
Studied at the Fine Arts Department, Painting Study Program (2014-2021), Indonesian Art Institute (ISI), Yogyakarta.I now live in Yogyakarta to continue developing my work. In art I am not afraid to create works until I can leave a legacy for the rest of my life. In 2016 I focused on traveling on the streets and until now I'm enjoying it. There are lots of interesting spaces out there that you can play with to make a masterpiece.

Palito Perak
Born in Bukittinggi, November 27, 1984.
Studied at the Indonesian Art Institute majoring in Visual Communication Design, actively involved in art events, especially in Yogyakarta, as a designer, artist and organizer, my works are inspired by the media, especially social media. Imaging coverage, popular methods and disguised issues are one of the impetus for visualizing an idea into a work.

Tran Quang Dai
Born in 1992, Vietnam
Resides and works in Saigon, Vietnam
Tran Quang Dai travels the world with a suitcase packed with moments in life. A public figure, who graduated from ULAWHCMC in IP Law, now using canvas as a medium to communicate with a glimpse of imperfect coexisting memories. Even though Quang Dai's portraits are drawn from real subjects, their non-figurative faces give us a detached perspective, yet we can easily connect and make them as personal as we want them to be.