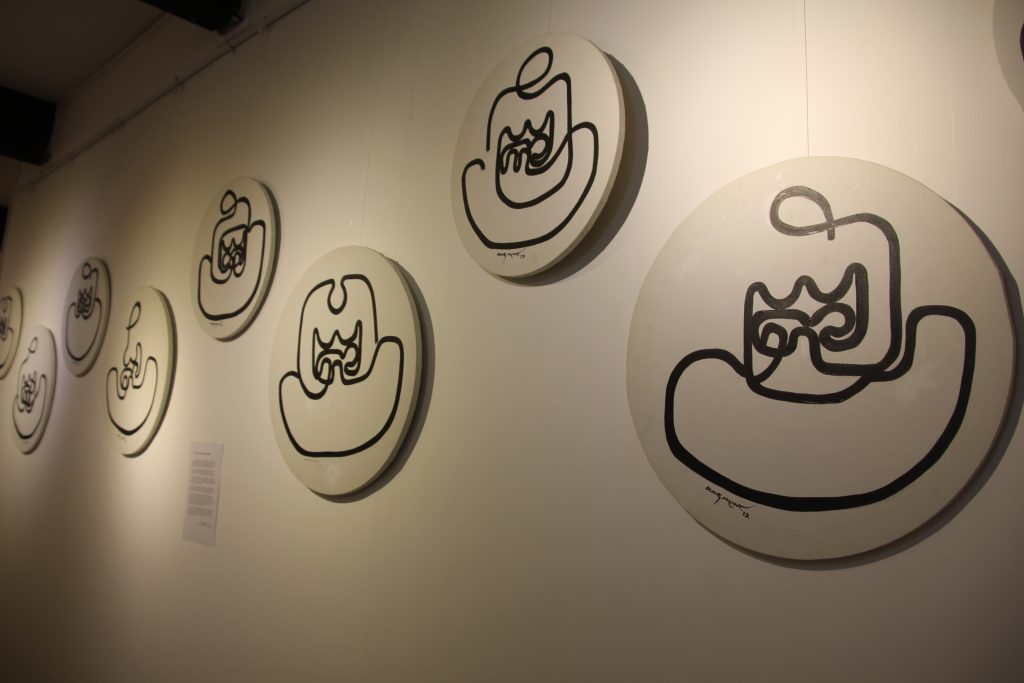 The new gallery, Kalasa Art Space, was opened in the center of Yangon, Myanmar's largest city, with a series of work by Mr. Aung Myint, one of Myanmar's leading Artists. This is a cozy space on the second floor of an old downtown building, which was built in the form of a grid in the British era. Aung Myint's works, which have been created since the days when there was no freedom of speech, are now highly regarded both at home and abroad and are leading the growing art scene in Yangon.

One of Aung Myint's representative work series is "Mother and Child", which is the main part of the exhibition "17 A.M". The figure of a woman breastfeeding a baby is drawn in a single stroke with a comical black curve on a white background. Works using a circular canvas about 50 centimeters in diameter are arranged on all sides of the wall. Among Aung Myint's works, which often give the feeling of the pressure of revolving around the inside, however, his series of work created a relaxing space that was easy to appreciate.

Another side of Aung Myint appears when the eyes are turned from a group of simple work that emphasizes maternity to the other side of the gallery. Here is a piece of white canvas wrapped in bright burning crimson and deep dark lacquer black. He prefers to use these three colors, which leave a simple and strong impression to viewers. He himself has a strong commitment to color, which you can see in the titles of his paintings, such as "Red is courage" and "Red and its red".

For Aung Myint, who seems to embody Myanmar's art history, the heavy pressure of history that artists were unable to freely engage in due to severe censorship should have been heavy. He denies the political nature of his work, but the expressions that come out of it also contain its poison. Sometimes the deep darkness within Aung Myint appears in what is expressed in vivid colors. In the work entitled "On the back of the red", a spirit-like face emerges behind a red design that images a steel lattice or a cross.

In the 2012 acrylic painting titled "Fan", the image of the fan, which is one of the tools of Buddhist priests in Myanmar, emerges. However, the key to questioning the viewer is that the Buddhist symbol "Manji" is the inverted key cross, whose key direction is reversed. The arrangement of colors in that colorful background appears to resemble a map.

The abstract painter Aung Myint can be said to be a hard-to-interpret artist. However, Ma Su Htwe Aung, the founder and curator of the Kalasa Art Space, who planned this exhibition, says, "You can just enjoy beauty without having to think hard, trying to interpret it."

At Kalasa, there is a space for relaxing so that people can feel art as closely as possible, and books are also placed there. In this new space, which opened at the end of September only a week ago, the exhibition of Aung Myint's work brought many art-related people and enthusiasts to the market, bringing the debate into bloom. These free spaces must be spaces that Aung Myint had hoped for during the long military reign. Aung Myint's work, which have come to represent the contemporary art of Myanmar, are now playing a role in enlivening the growing galleries and art spaces in Yangon.