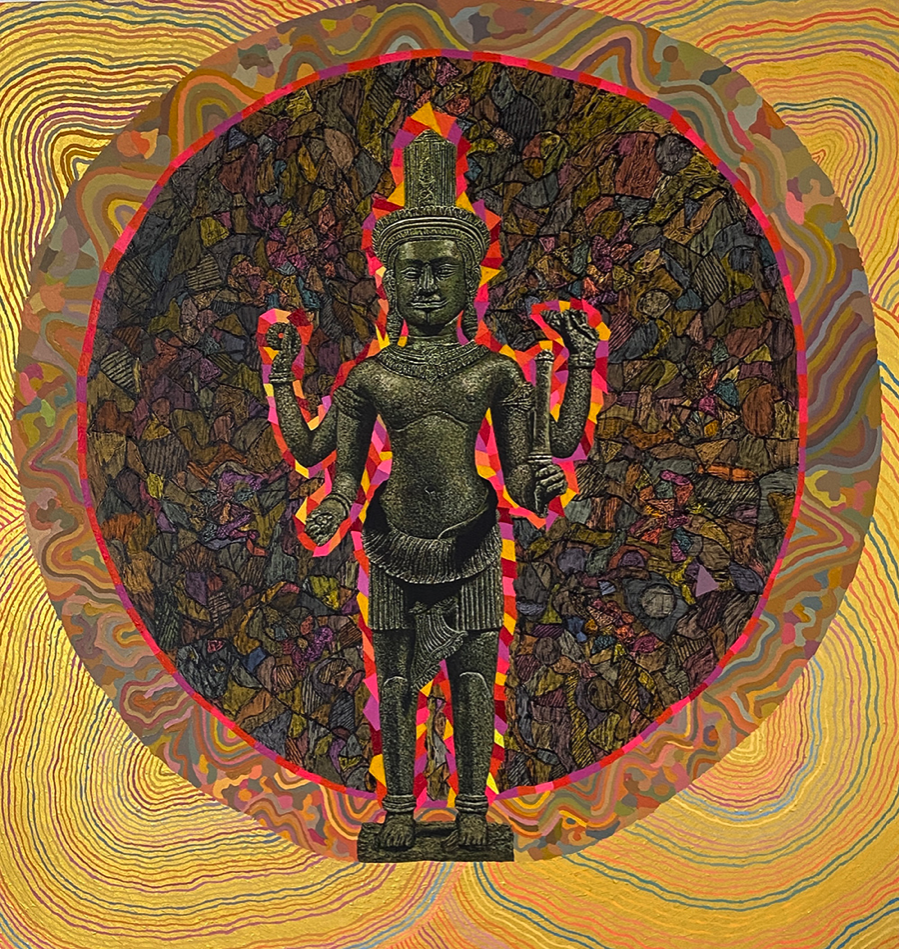 “No Miracles”, the solo exhibition of Wutigorn Kongka at Number1Gallery. The artist who expresses his story through aesthetically line patterns and remarkable colors with an individual identity. From a fascination in Art, Ancient Greek Roman sculpture to Renaissance, ancient traditional decoration such as stained glass of Mosaic including modern paintings since early 20th century for instance art group cubism, both early and late period of abstract to expressionism, realism and Pop Art. These has motivated artist to be able to create a new world in his own ideal.

There was once someone said “A gift is an order from god that has given to artists”. Michelangelo or Donatello even Rodin might be an avatar of god that received a particular command from the highest to make a peculiar human shape where there was no one had ever made it before during their period of time. On the other hand, a certain story that had added from religious beliefs. Every religion both of western and eastern sides of this world are typically reflected through an assumption which alike an icon of the tales or ancient myths. In addition, they were originated from spirit mediums and embodied with spectacular narratives. They were made to remain and enhance human’s beliefs to become more real in the real world. God or idealistic individual from a tale is  full of an  imagination and created themselves certain forms in order to satisfy a transaction of the creed which related to politics. In fact, human in each era desires to have power to control their people and to be acceptable to the world.

This exhibition, artist tried to remake a new relation from a history and connect with an inner soul during a modern time. It gradually became an attempt that urged him to bring those spirit mediums from immortal masters and appear their embodiments in another forms by appropriated an original from a familiarly general work. Artist wanted to produce them in identical perspectives in order to have a new aspect in paintings and combined with all mediums as a representative of artist himself, including faces and figures where they were discovered from his personal imaginations in a purpose of new connection without wanting them to believe and faith in sanctity as a messenger of god of the world that had given to those masters and their sacred works. Yet, artist himself would like to make holiness in his own way and question that “The boundary of combined sanctitude with certain supernatural myths, even aura or an individual peculiar power of a graceful artist that was built up repeatedly or delineating a message from historians which had been inscribed on the media would be able to merge with a creation that artist had recreated or not? What direction it can be progressing with a creating method, aesthetic of elementary paintings rules along with the possibility of the realest identity of artist?”