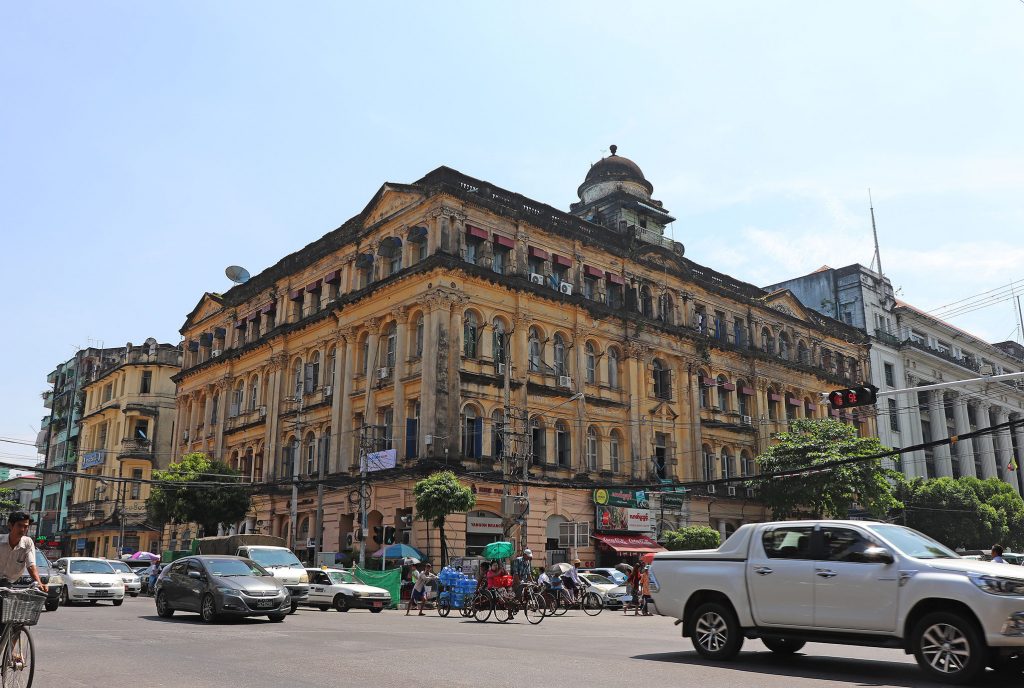 In Yangon, there is a gallery which could be called a 'legend of the Myanmar art world'. This is Lokanat Galleries that stands on Pansodan Street, and it was founded in 1971. It is said to be the oldest of the existing galleries in Yangon.

The Building Itself, a Masterpiece of British Colonial Architecture

The building where Lokanat Galleries is located was a commercial building in the British colonial era, where powerful companies gathered. The Victorian-style building that would have been built with as much luxury as possible at the time still overwhelms other buildings of the same era around it. However, the building is currently a mixed-use building containing the offices of large and small companies, and the inside is cluttered. On both sides of the entrance, there are street stalls that open onto the sidewalk, so the atmosphere does not appear to be like there is a famous gallery inside.

After you weave through the gaps between the street stalls, and step into the building, there are stairs with iron covers on the wood that have worn out over a long period of time. Go up to the second level while making creaking noises, and the floor in front of you is brilliantly decorated with tiles. After being there for more than fifty years, turquoise blue and beige mosaics spread beyond the open door into the gallery.

The high ceilings of the gallery are full of the longitudinal windows, characteristic of the Yangon buildings of this era, brilliantly bright. Wonder if the people who are talking over tea seated at the center table and laughing are people related to the group exhibition that is taking place.

The first owners of Lokanat Galleries were a former military writer, Ba Than, and an attorney, U Ye Htoon who had been trained in art, and the current managers are their children. Aung Myint Tun, the manager who runs the gallery on behalf of the owners (who are often not in Yangon), told us about the time it was opened.

"I have heard that the first owners set up this gallery hoping for a place where they could spread Burmese art to the world. Around that time, painters had difficulty eating in the arts, so they made a living by drawing illustrations for newspapers and magazines."

At first, Mr. Ba Than and his colleagues called on twenty artists that represented the Myanmar art world to become founding members. This was the beginning of the membership system, where members proceed with the operation of the gallery, which is one of the greatest features of Lokanat Galleries. The membership fee was free, and there were many disciplines to be observed, such as no plagiarism, and the prohibition of 'bad words' being used among members.

The memberships were lifetime-based, and if someone died, they chose new members on their own and maintained twenty members at all times. In 2011, the company increased its membership quota, and now currently operates with 25 members. When we interviewed the owners, they were in the process of selecting a new member to replace a vacancy, and the total number of members was just 24. The youngest was 39, the oldest was 88 years old, and all but one sculptor were painters, three of whom were women.

The Desire to Hold the Exhibitions at Bright Accountancy was Flooded.

Members can participate in joint exhibitions at the gallery four times a year without paying any fee. Twenty percent of the price of the paintings sold is passed to the gallery, and the rest is for the artists themselves. Other times are used as rental galleries. One room is rented for 80-100 US dollars per day, and 100% of the selling price of the painting sold is retained by the painters themselves.

A manager says somewhat proudly, "It's a good and clear pricing system, right?", "We don't prioritize those who wish to hold the event without any connections, but decide in strict order of application. However, once the event is held, the event holders cannot apply for more than one year."

The period of an exhibition lasts from three to five days, and there are some group exhibitions where the costs can be shared. Most art works are flat paintings, with a few sculptures and installations.

From Censorship to an Era of Thinking

This gallery has also been fighting censorship for a long time under military rule. Aung Myint Tun reminisces.

"All the departments involved in censorship used to send in staff, so the number of censors totaled more than ten at the time of checking. I heard that if there was something doubtful about the artwork, they would ask the artists about the intention of their expression. Even if assumed to be a criticism of the regime, we somehow tried to make them pass censorship by explaining such things as, "a revelation of the artists' imagination." Even so, if the censors did not nod their heads, we had to withdraw the work. If we had still forcefully displayed the works, both the painters and the gallery owners would have been arrested."

Although censorship was abolished in 2012, that does not mean that artists can produce any type of work. A certain degree of self-regulation still goes on, and it is said that the authorities will be summoned if a piece of work is displayed that is believed to criticize the regime.

Myanmar Art, Which has Changed Drastically in Half a Century

In the 1970s when Lokanat Galleries was born, most embassies in developed countries were purchasing art works. However, democratization has changed the situation surrounding Myanmar art.

"The ratio of customers from abroad is now 60 to 70 %, the rest is in made up of wealthy Myanmarese. Foreign people buy upcoming and anonymous artists if they like their work, whereas Myanmarese buyers purchase a certain level of famous artists' work. Also in Myanmar, art has become the target of speculation", Aung Myint Tun says. It may be a shame that democratization is advancing in this respect as well, but art may increase its degree of freedom by stabilizing the lives of artist.

A legendary galley of art, Lokanat Galleries, has been observing the transition of art in Myanmar for a long time. It will probably continue for the next fifty years, like floor mosaics that do not fade with history. If you ever come to Yangon, I would definitely like you to stop by, because there is a half century of Myanmar art be seen here.