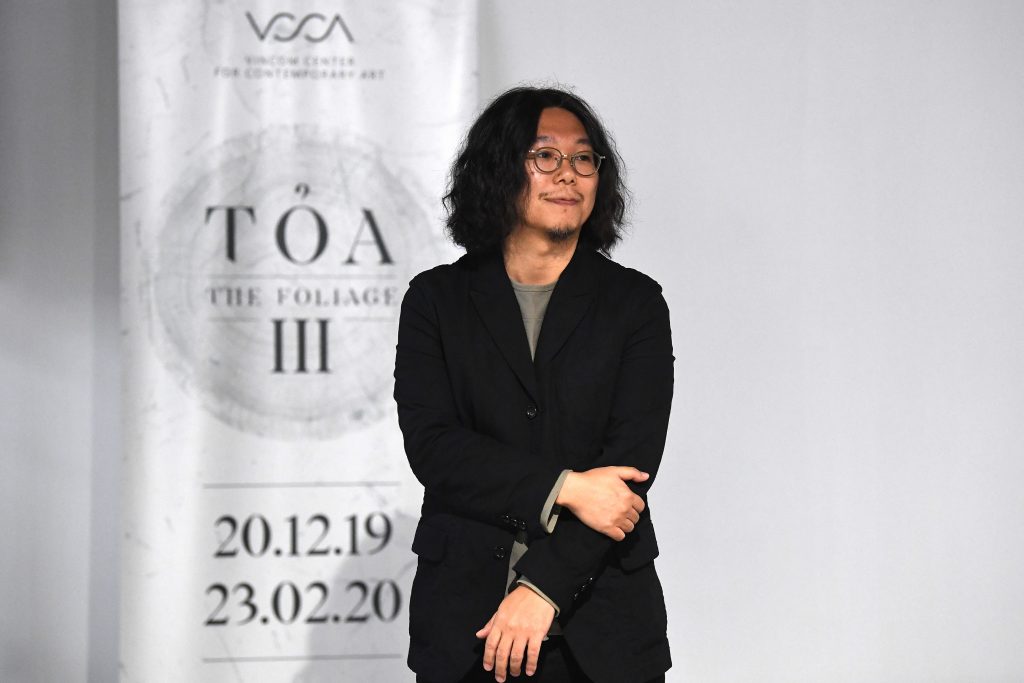 "I'm sure Vietnamese has high quality of aesthetics." The words of Endo, an artistic director of the Vincom Center for Contemporary Art in Hanoi, can be felt instantly when you walk through the cities of Hanoi and Ho Chi Minh City. There are many cafes with good taste, and you often encounter cute designs of tableware. This would not be irrelevant to the fact that the country was under French rule from the late 19th century to the WWII, but that would not only reason for this. Endo says his search here is to spread art with an Asian context.

"There must be something I can do in Vietnam, a country I've never experienced."

From his youth, Endo had a connection with Asia. His research theme at Kyushu University's graduate school was the modern culture of the Philippines. After that, while gaining a career as a curator, he visited the Philippines, Indonesia, and other countries for work.

When he was working at Higashiyama Artists Placement Service in Kyoto, a sudden offer to "be an art director in Hanoi" came to Endo. It was an introduction by his friend, a curator at the Singapore National Museum of Art. Although he was not familiar with Vietnamese art, he thought, "In Vietnam, a socialist country that I have never experienced before, I may be able to do something different." At the beginning of 2017, Endo got off to Hanoi and participated in the launch of a new art space.

The Vincom Center for Contemporary Art, where Endo works, is a huge facility with a 1,700-square-meter exhibition space, occupying a famous shopping center in Hanoi. Entrance is free, and it has 300 to 2,000 visitors a day. Among about 20 staff members, Endo is the only one who is well versed in art. He carefully taught them how to display art works, how to light the artworks, and so on, from the "basic of basics."

Endo and his team have organized about 20 large and small exhibitions since the center opened in June 2017. 300,000 people visited the original painting exhibition of the popular Vietnamese picture book "The adventure of a cricket boy". In cooperation with civic groups, they also hold exhibitions to appeal to children about environmental issues, as well as exhibitions on the theme of the Vietnam War.

Providing opportunities for young artists to experience the world

Endo has been focusing on a project to train young Vietnamese artists since last year. It is a two-year program in which 10 young artists from a wide range of fields are selected to gain experience both in Vietnam and abroad. First, in Vietnam, they invite international art experts and artists, including Mami Kataoka, director of the Mori Museum of Art in Tokyo, to hold 15 to 20 lectures. After holding a group exhibition at the center, they will be trained abroad for about a month.

"There is little information they can know about the world in Vietnam," Endo emphasizes. "Also, it's difficult to obtain a visa, so it's hard  for an artist to learn art abroad on his own." Since Art collages in Vietnam are too biased toward academism, he said that the aim of this project is to get young artist to have a feet-on-the-ground perspective by getting to know with practitioners around the world. Participants have already experienced training in countries such as Germany and Indonesia.

Vietnam where West and East, Tradition and Modern Combine

According to Endo, there are two major streams in Vietnam's art scene. One is a group of artists acting with grants from overseas institutions, such as Institut France of France, Goethe-Institute of Germany, and Japan Foundation of Japan, which strongly reflect Western values. Another is the strong public-colored artists participating in Vietnam's national cultural projects. The Vincom Center for Contemporary Art, led by Endo, says it aims to cover both. They are trying to discover new things, while still balancing between these two streams.

Vietnamese traditional pottery "Gom Bat Trang" which is popular among tourists has developed a new market in recent years, with its traditional designs such as goldfish and dragonflies being processed into modern styles such as coffee cups. Endo describes these traditional Vietnamese cultures as "active culture." Unfortunately, many traditional crafts in Japan are no longer able to escape from the framework of tradition because they cannot be established without grants. However, in Vietnam, it has sublimated traditional crafts in a modern way and has succeeded as a business. "If contemporary art comes from Western World, it would be the happiest marriage to be associated with the local active traditional culture," Endo says.

When I listen to Endo's story, I felt that he has a strong feeling toward something Asian, which encompasses Japan, rather than only Japan. The term "Asia" itself is also a concept that brings together a wide variety of things. Endo's goal of "contemporary art with Asia on its back" must also come from a variety of things, including the energy of the traditional culture of the region, the thoughts of artists in the social context of Vietnam, and the new sensations brought about by Endo, a foreigner and a Japanese.