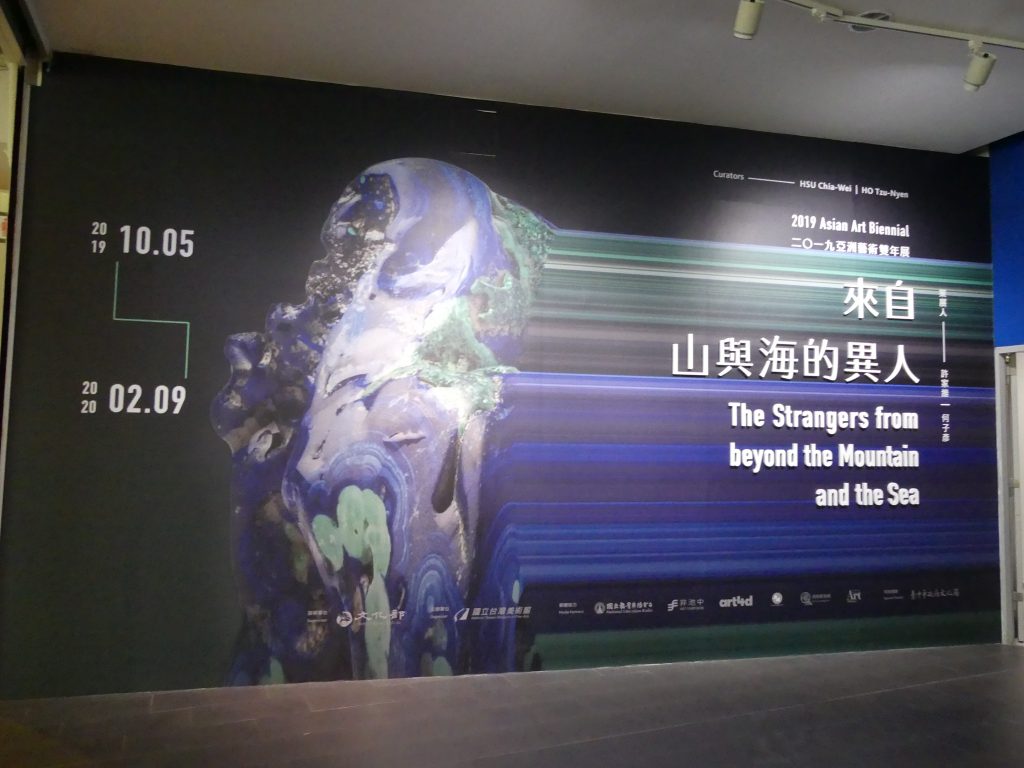 From Bangkok, where both everyday and extraordinary life coexist in a dream-like atmosphere because of the city's heat and energy, I come to Taiwan where the seasons are perceived as cold, and whatever scene you imagine of Taiwan, it has a prosaic atmosphere. The number of Southeast Asian artists who are invited to the exhibition is considerably decreasing - I had already stepped into East Asia.

Out of the thirty exhibiting artists from the Asian Art Biennale, held at the National Taiwan Museum of Fine Arts (1) in Taichung, located in the center of Taiwan, eleven were from Southeast Asia and four from the Mekong River basin, of which the numbers were further reduced - with the exception of Thailand's popular young artists, Korakrit Arunanondchai (2), who often shows up at most biennales in the world, there were also collaborative teams of Thai artists and curators, jiandyin (3), Laos artist, Tcheu Siong (4), and Myanmar Sawangwongse Yawnghwe (5).

For that reason, there were more East Asian artists such as Korean and Japanese in the Taiwan biennale whose expressions tend to be ideological; an installation work by Japanese artist Yuichiro Tamura, based on Yukio Mishima's novel 'The Sailor Who Fell from Grace With the Sea', and a piece of video work by Korean artist, Park Chan-Kyong that pursues the ideological connection between the Kyoto school of Kitaro Nishida and  special attack corps.

The way of thinking about the theme 'Strangers' which is referred to in the Biennale's title 'The Strangers from Beyond the Mountain and the Sea' is also ideological and conceptual rather than sensuousness or experiential. Climate gives rise to changes in human thought. It is agreed that there are differences in the Renaissance between the south and the north in Europe as well.

If so, has the idea been projected around the Mekong River basin, where the highlands of the Indochina Peninsula are, to instigate the mysterious citation of 'Zomia' (6) by the artists as well as this exhibition's curators, Hsu Chia-Wei (Taiwan) and Ho Tzu‐Nyen (Singapore)?

I don't think so. Rather, the illegal zone which is famous for producing drugs in Indochina aroused the anthropologist James C. Scott to think of the 'Zomia', an idea of a region above and beyond state rule.
The Asian Art Biennale had exhibited works to prove it. One is the video 'Bitcoin Mining and Field Recordings of Ethnic Minorities' (7), produced by Liu Chuang, Chinese artist mentioned at the beginning of the Bangkok edition of the previous article. The video, coupled with the unfamiliar language of the narrators from ethnic minorities, brought me back to the reality of the Mekong River basin again.

The Mekong River basin was once again touched with sensual and geopolitical reality with the powerful footage from Chuang. It's not just a golden triangle. A power vacuum has been created by the large-scale power development in the rivers connecting the ethnicity of minorities living in the mountains, and virtual reality (virtual currency).

Perhaps with this ultimate anarchy, locals blow hot air into the countries along the Mekong River basin, and a strange aura may be brought to the creation of artists who breathe this energy. Its aura is not like Benjamin's uniqueness or one-sidedness. It is a peculiarity that results from the absolute freedom which is miraculously enjoyed by the geopolitical power relations unique to this region, and this peculiarity makes people dream of the Mekong River basin becoming the El Dorado of art.

While I was walking through  the Singapore Biennale, SPECTROSYNTHESIS II, and the Asian Art Biennale, I was no longer able to take my eyes off the Mekong River basin.