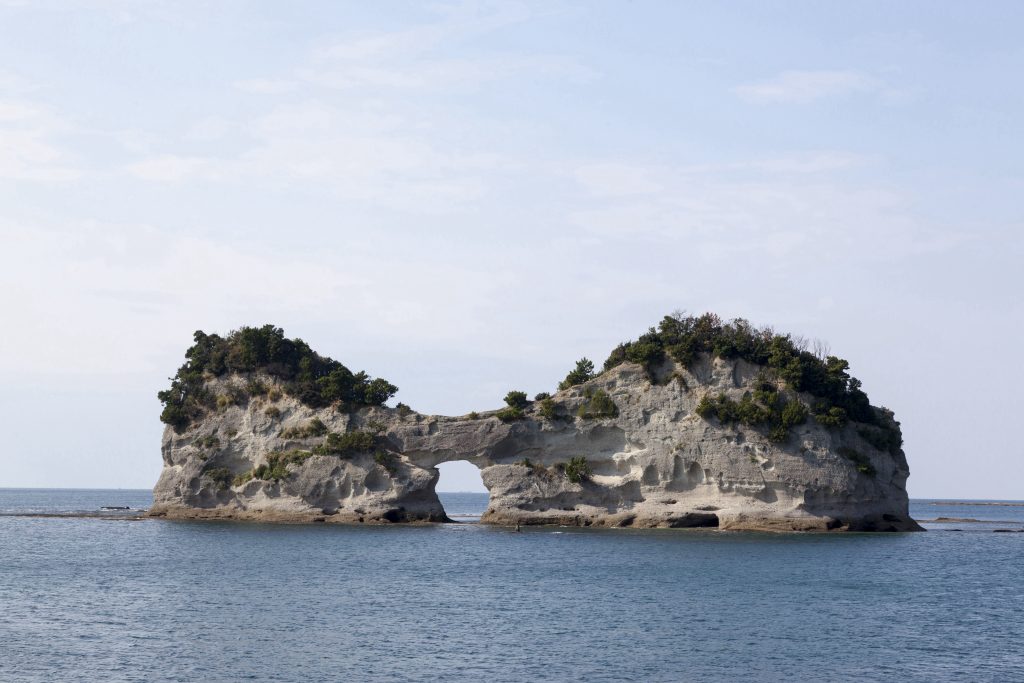 1 The Background of Kinan Art Week

Firstly, the general producer Yuto Yabumoto (myself) is from the Kian area, Wakayama Prefecture and I left the Kinan area 15 years ago and started my own business in Cambodia. I now have a law firm with 18 offices worldwide and have supported many companies in various locations, sometimes with joy, and other times with pain. In the process, I often struggled with the issues of what “Globalization” and “Localization” should be, and what the relationship between them should be.

Personally, I had a strong sense of concern about legal business, in that “I could not survive unless I created new value that is universally accepted”, so I was trying to drive a wedge in a completely different place and jumped into the world of art (particularly into the world of contemporary art in Cambodia). What I saw in the Cambodian artists, their works and their creative attitude was the very embodiment of “Local = Global”. I began to wonder if it would be possible to reconstruct this as “the Culture of Seclusion” and “the Culture of Ports” which is being updated from ‘Tonda Port’ to ‘Nanki-Shirahama Airport’. What kind of chemistry will occur if a group of works that visualize “Local= Global” were brought together in the Kinan area.

It was by chance that I was fortunate enough to meet Prof. Daisuke Miyatsu in Cambodia (President of Yokohama College of Art and Design, and one of the board members of the Mori Art Museum). Meanwhile, Nanki-Shirahama Airport was activating new initiatives. Furthermore, we were blessed with members of our committee, and were finally able to achieve the starting point for Kinan Art Week now.

2 Why is Kinan Art Week Necessary?

In conclusion to answer the above, “Export' is the only way to survive in the countryside, and Kinan Art Week is the means to promote “Export”. Based on my experience of the Asian countryside, where the population and domestic demand are both shrinking, is forced to choose between becoming poor or depending on other countries and cities with huge domestic demand. However, the countryside should be left as it is, but, I believe that 1% of the players in the region need to benefit from global economic growth, and that these benefits need to be circulated throughout the region. This is exactly what the contemporary artists in the countryside are doing.

The Cambodian contemporary artists who will appear at Kinan Art Week 2021 are both local and global. Fortunately, or unfortunately, it is no exaggeration to say that there is no contemporary art market in Cambodia at the moment. This means that they need to compete and survive outside Cambodia, that is, in the global world, by nature. Together with their works, they export their value to the world as life-sized Cambodian storytellers.

Their work is the result of thorough deep research of local history and culture, and is characterized by the fact that they spend a lot of time than anything else on thoroughly extracting the local essence. They excavate the local climate, history, culture, etc. of the unique land at the level of hundreds or thousands of years in history, and extract its essence based on historical context. They make it strong enough not to deteriorate in the global world, and export it as a high value-added product all over the world. The resources generated around the world are then circulated within local communities, such as the Sa Sa Art Project in Cambodia, where they are maintained and developed. They are simply exporting their value ‘as is’ to the world. Can't we do the same thing in the Kinan area?

It is certain that “Export” will become increasingly important, not only in the Kinan area, but also in the rest of Japan. In our work on Asian and global legislation, we feel that Japanese companies are reaching the limits of their overseas expansion. The only Japanese companies that survive in the market of each country are those that have overwhelmingly succeeded in localizing their operations and this requires enough capital and human resources. However, the more localized a company becomes, the more its profits are reinvested locally and do not return to Japan. We realized that Japan has changed into a country that is made up of a primary income balance (so-called dividend). Therefore, in Japan, where domestic demand is shrinking as the population declines, we believe that it is of utmost importance to promote direct exports from the cities and rural areas to all over the world, to increase trade surpluses like Singapore and Taiwan have done, and to use the resources for alleviating poverty and increasing social security measures.

In order to achieve this, it is necessary to have high value-added products and services that can be exported to all over the world, and we believe that contemporary artists are at the forefront of this. During Kinan Art Week, through encounters with the works of contemporary artists from around the world, we hope that the event will provide an opportunity for people in Kinan to consider the meaning of “Why these works are worth millions or tens of millions of yen”? “What is the source of that value”? We also want them to learn how to export like contemporary artists. Although art experts may become annoyed, I believe that the definition of art is ‘if it moves you, it is art’. In this sense, anyone can be an artist, whether they are a farmer, a salaried employee, a lawyer, a mayor, and a prime minister. Through the breadth and depth of art, I would like the people of Kinan to export their values to the world like contemporary artists do. Kinan is clearly more brilliant than any of the other lands that I have ever visited. I’m sure this objective can be achieved.

The theme of Kinan Art Week 2021 is “Komoru (seclusion) Muro Hiraku(openness) Kinan”, and I will try to reconstruct the relationship between (true) globalization and localization. The phrase ‘true globalization’ may make you shudder, but my conclusion is that ‘true globalization = localization’. I am strongly influenced by oriental philosophy such as Okakura Tenshin's Advaita Vedanta. In particular, Minakata Kumagusu, one of the most important and eccentric persons, originated from the Kinan area, said that “The microcosm of bacteria under the microscope is the same as the macrocosm (universe).” This paradox has survived beyond eternal time.

If “(true) Globalization = Localization” exists, then the above-mentioned problems of impoverishment and dependence could be solved. If the countryside could remain ‘as it is’ and build up a number of strengths in friendly competition with other countries, cities and countryside areas, the world could be balanced (being in a state where there is no civil war or any other war). Just like the idea of Kumagusu, that the multiplicity of all things in the universe is a state in which they function organically and are maintained in one state.

Thus, during Kinan Art Week, we will present the hypothesis that world peace can be achieved by maintaining the locality of a region and realizing ‘true globalization’ as it is. In this sense, the practice in Kinan is an important challenge, directly related to peace around the world.

As for the specific medium and long-term plan for Kinan Art Week, we would like to make this activity not a temporary one, but a continuous one. However, the number of art festivals in Japan as a whole continues to increase, and we believe that similar event will be weeded out in the future. It is a major premise that we can obtain the understanding and cooperation of everyone, but our strengths and future vision are as follows;

In addition to the global network of Aura Contemporary Art Foundation, which provides funding the projects all over the world, we have invited Prof. Miyatsu to be our Artistic Director, enabling us to invite and exhibit international artists. Prof. Miyatsu is one of the world's leading art collectors and can provide access to world-renowned artists and hopefully obtain permission to exhibit their work.

Lastly, in our activities, we want to place special importance on “the development of the economy and education”. The following is our specific policy.

(1)   Economic Development
Firstly, in terms of short to medium term demand, the Kinan area has been a leader in welcoming “workationers”, and this is seen as an advantage. However, as competition for workationers is expected to intensify in the future, in addition to the existing beach resorts, the staging of cultural events and the development of the environment that all make use of the region's unique history, culture and contemporary art will offer great potential in attracting workationers. Specifically, besides the open culture of the peninsula, we would like to encourage a more introverted “secluded culture”, and by making the exhibition of contemporary art constant, we would like to create a place for bringing opportunities which can stimulate the thoughts of innovators and researchers, and this will help to develop their new ideas.

In the medium to long term, we plan to focus on attracting and developing primary and secondary industries in the Kinan area. While the leaders of tertiary industries are in a state of flux, the leaders of primary and secondary industries cannot easily leave their local area, and therefore they need to be creative in order to develop high value-added agriculture and manufacturing, and to export it to all over the world. Furthermore, we would like to convey to the leaders of primary industries in the region the importance of digging deep into history and culture and extracting the universal essence, and to raise their interest in history, culture and art. Thereby we wish to contribute to the economic development of the region, while gaining people’s steady understanding of the economy, history, culture and art, all of which are inextricably linked.

Through such activities, we will make our utmost effort to obtain continued interest and economic sustainability through these activities.

(2) Educational Development
The second is to strengthen educational measures to maintain sustainability. In the short term, it is the selection and development of local project leaders. Specifically, we plan to select a local leader for this activity, and to transfer a certain level of broad curatorial, event planning and management skills. For this and the next activity, we plan to invite external experts, but afterwards we will also build a support system to enable the local leaders to complete the project.

In addition, considering that there are regions and generations with little interest in and access to art, we believe that it is important to hold workshops for elementary and junior high school and high school students. In fact, at Tonda Junior High School and Tanabe Junior High School, which are the alma mater of Yabumoto, the chairperson of the executive committee, video works by Asian contemporary artists were shown, and discussions were held afterwards. The students' reception of the project varied, but we will continue our activities to increase the number of experiences of unknown values that differ from existing concepts.

Through these activities, we eagerly hope to further foster the next generation's love of the Kinan area and pride in their hometown, to raise awareness of the region's wonderful history and culture, and to increase the number of future exporters of the Kinan area.