Dinh Q. Lê from Vietnam again after overcoming the fire 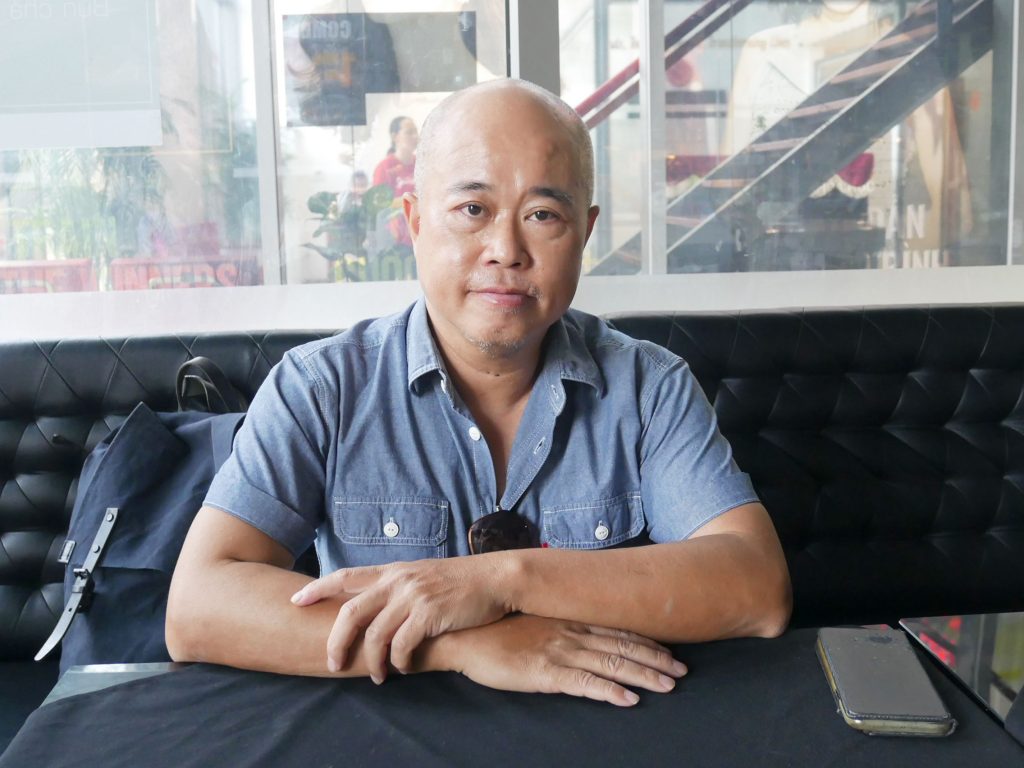 Dinh Q. Lê, who has published numerous contemporary art works based on photographs of textiles, installations, videos and sculptures, was born in a town near the border with Cambodia in Vietnam, and then moved to the U.S. to escape from the conflict with Cambodia that occurred in his childhood.
After receiving his BFA degree in photography at the University of California at Santa Barbara and his MFA degree in School of Visual Arts in New York, he returned to Vietnam again and is currently creating artwork mainly in Ho Chi Minh City, Vietnam.
He told us about the war that experienced in his childhood and the current art scene in Vietnam.

War he saw in his childhood

Born in Hà Tiên, a Vietnamese town, near the Cambodia border, Dinh Q. Lê experienced the war during the Cambodian-Vietnamese War, which became full-fledged when he was about 10 years old. Since the area was close to the Cambodian border, clashes were intense, and he witnessed the scene of the murder, where people were shot to death every day.
And he escaped from the war and moved to Los Angeles with his family.

While studying art at university in the U.S., he examined the war that once experienced and faced up to the question about the war in his childhood.
The slaughter which had occurred around him was chaotic in his infancy, and he understood its meaning in his peaceful life as American student.

From the United States to Vietnam again

Although he spent a long time in the U.S., he recalled that he had a feeling like a simulation that tried to blend in with Western culture. Perhaps the part that was not so solid as to try to get used to the U.S. was something that he wanted fundamentally, rather than a cultural background.
In 1993, when he returned to his homeland, he came into contact with the youthful power of the people living in Vietnam, and discovered the value of being able to hear directly from people about the history of Vietnam war which had the most important meaning in his artwork.
As a result, in 1997, Dinh Q. Lê moved the base of his activities to Ho Chi Minh City, Vietnam.

Memories and artwork of war

Dinh Q. Lê began to take up the war in his works and learned deeply through interviews to those who experienced the war. Listening directly to the traumas and other things of that time from them, it was linked to his own memories and reflected in the realistic art production.

About the current Vietnamese art scene

It was from the 1990s that contemporary art began to be announced in Vietnam, and the art before that time was about social realism and most of the paintings were realistic.
What triggered the spread of contemporary art in the 1990s was that embassies such as France and Germany opened to the public as places for learning about art. There became a place to nurture modern art for young people who only knew traditional craftsmanship and realistic paintings. And because of globalization in recent years, the number of young artists who learned in Europe and the U.S. has increased.
At present, Dinh Q. Lê is his base in Ho Chi Minh City, the Sàn Art Gallery, where he devotes himself to training and curating young artists, in addition to presenting his own works.
What is different from the art schools in his training method is to set aside time for discussion about the work. Schools only evaluate the artwork, and discussing detailed analysis and reviews of the work is extremely effective in the production of works by young artists.

Currently, Dinh Q. Lê is preparing for Paris exhibitions and Bangkok Biennale.
Also, in Ho Chi Minh City, he plans a poster art exhibition of propaganda featuring social issues such as homelessness, social disparities, and politics at the Sàn Art Gallery.
An ironical attempt to raise a problem with propaganda posters that originally had the intention of guiding ideas is likely to be a very interesting and unique exhibition.

This work featured the relationship between Vietnamese people and war attracted by helicopters, and his name became known worldwide through this work.

A piece reminiscent of the sinking of a ship carrying refugees and asylum-seekers who fled Khmer Rouge.