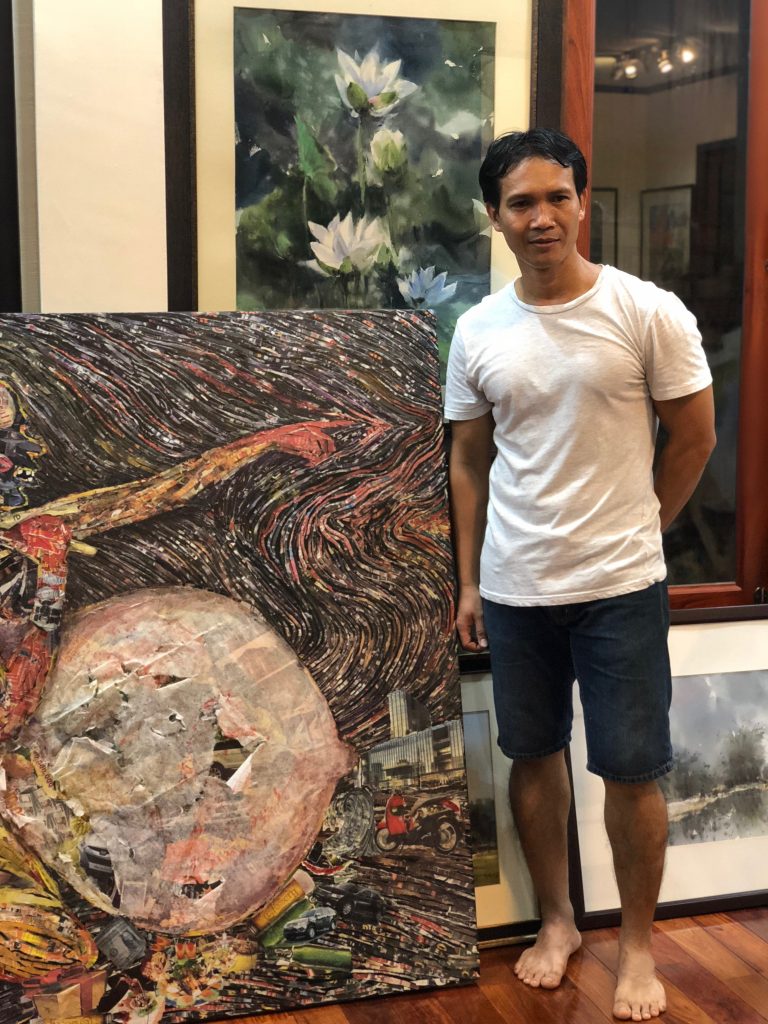 A collage of innumerable pieces of paper strips of newspaper that were torn into one centimeter width and spread all over a canvas is the work of Laos's leading artist, Hongsa Khotsouvanh. He continues to work hard at his home, which is also a studio, in the capital city of Vientiane.

He has loved painting ever since he was a child, and from that time, he decided that he would become a painter in the future. After graduating from high school, he learned general art at junior college for three years, and for another three years he specialized in painting at the National Institute (University) of Fine Art. After graduating from university, he worked for several years as a staff member in an NGO to increase public health awareness in ethnic minority areas in northern Laos. He also worked on creating posters for use in these activities.

Since then, he has devoted himself to creating his paintings. At first, he belonged to a gallery that once existed in Vientiane as an exclusive artist, but now he does not belong to any galleries and works as an independent artist because of his thoughts about free expression without restrictions.

What is common to Khotsouvanh's collage work is 'contrast'. What is depicted on one side of the contrast is a variety of things that have traditionally taken root in the lives of Laotians, expressed by him as 'the Lao identity'. These include a tricycle called the Samloo, which was often used by common people, instead of walking, a woven basket carrying vegetables and farm tools, and a one-story house with a straw thatched roof. The other aspect is a group of symbols of economic development that have begun to appear in Laos universally, including sightseeing buses, which carry large numbers of travelers to tourist attractions every day, mobile phones, luxury cars, alcohol, and brilliant shopping centers.

However, this contrast gives the impression that they are different from the direct criticism of the modernization of society, which tends to be common, or the negation of the present-day nostalgia. Born in 1975, Khotsouvanh seems to express positively without concealing the contradictions or his own swaying including his childhood life's nostalgic memories, as well as the excitement of the richness currently enjoyed by economic development. This may be the reason why his natural expression brings some sort of pleasant aftertaste to the viewers and keeps capturing their gaze.

These collage works were on display at the exhibition, 'Sunshower: Contemporary Art from Southeast Asia 1980s to Now', held at the Mori Art Museum and the National Art Center, Tokyo in 2017.

In addition to the newspaper collage, Khotsouvanh is also known for another style. This style is a watercolor painting that expresses rural Laos, the Mekong River and lotus flowers in delicate tones. Though it cannot be said that it is a highly original style, the gentle painting in pastel tones gives comfort to the viewer.

Collage and watercolor painting – regarding the two styles with completely different painting methods and tones, we asked that which was more like himself and which was more fun to produce. He replied with an unfeigned smile and without any hesitation; "Both of them are like myself and I like spending time producing both collages and watercolors. If I get stuck with one, I'll start with the other."