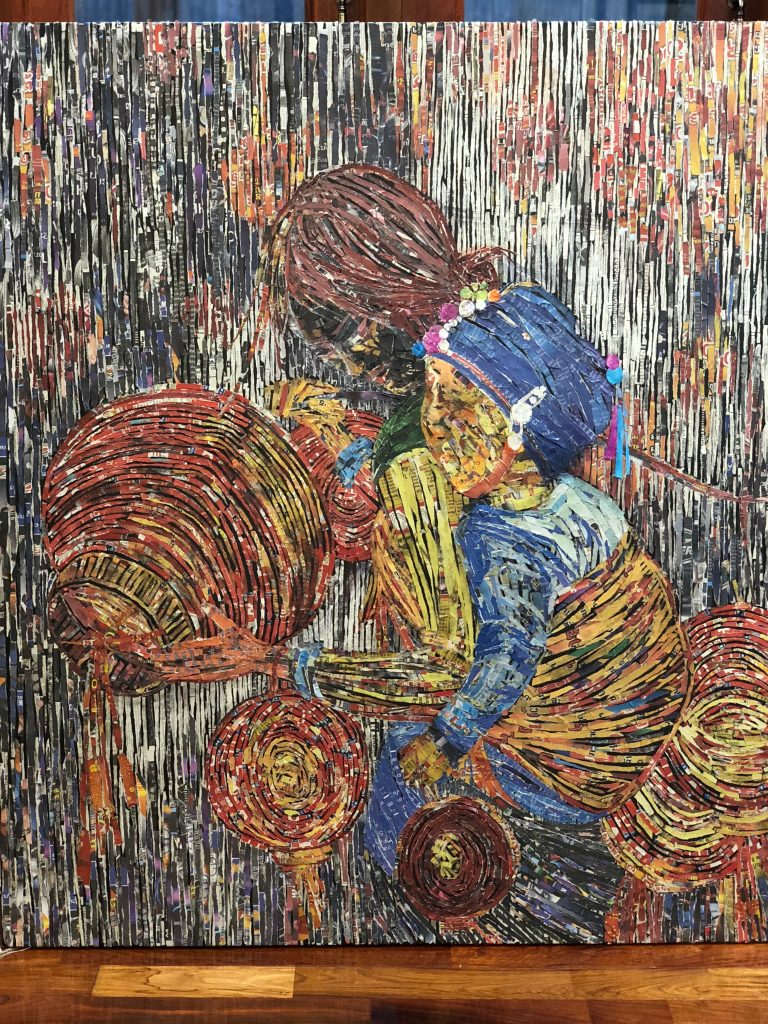 As a landlocked country on the Indochina Peninsula, Lao PDR, which shares borders with the five countries of Thailand, Vietnam, Cambodia, Myanmar, and China, must be said to be less frequently spoken in the context of contemporary art than its neighbors in Southeast Asia. In recent years, however, there has been a steady increase in the number of opportunities to be exposed to the works of Laotian artists outside the country, such as being invited to the Singapore Biennale and the Asia-Pacific Triennale (ATP, Australia).

In the 14th century, Lao PDR, which prospered as the Kingdom of Lan Xang, was incorporated into French Indochina by France from the end of the 19th century to the middle of the 20th century. Subsequently, following the Japanese military's invasion, independence from France, and the re-stationing of French troops, the monarchy was abolished by the revolution of the Lao People's Revolutionary Party in 1975, and the country became the current socialist Lao People's Democratic Republic with the same party system. Due to its geopolitical characteristics, it was also the land of the tragedy in which the most bombs were dropped in the world during the Vietnam War, and many artists face up to the scars and memories of the war that remained unresolved, such as craters created by bombs and unexploded ordnance that remained unresolved.

Most of the artists in Laos are from Lao National Institute of Fine Arts, and the majority of the graduates work in such jobs as teachers and craftsmen in public works (posters, sculpture production, etc.), but some make a living by producing landscape paintings and Buddhist paintings sold in commercial galleries for foreign tourists. At this only art educational institution they teach the art of oil/watercolor landscape paintings based on modernism techniques imported during the French colonial period, as well as the production methods of socialist realistic works. May Chandavong, known as the first generation of contemporary artists, is a former vice president of the university of Lao National Institute of Fine Arts and has influenced many students. After receiving art education in Paris, he returned to Paris and drew scenery pictures of Laos, which is scenic of scenic beauty, while he has produced many highly messaging works that reflect the experiences and memories of independent movements, the Vietnamese war, and the revolution, and so today he is certified as a national artist.

As a public institution, Lao National Institute of Fine Arts is the only art educational institution, but the art school established by French artist Marc Leguay, who influenced art education after independence from France, also played an important role. In addition to his own art school, he was hired by the government to teach drawings and watercolors at junior and senior high schools. In 1975, after the French embassy remodeled house, the city of Vientiane owned it, and it is now leased and operated as a MASK gallery by artists. There are no public art centers or museums, but there are several galleries in the country that provide a place for contemporary artists, such as i:cat gallery, which is run by an Australian woman who is a Lao art collector.

In addition to issues such as educational systems and forums for presentations, artistic expression is not a guaranteed activity of freedom in Laos, a socialist regime, and depicting nudity and military personnel is subject to censorship. Although there are restrictions on works that are perceived as government criticisms, some artists produce works reflecting their awareness of the environmental and social changes accompanying rapid economic growth in recent years, such as Hongsa Khotsouvanh and Bounpaul Phothyzan, who have exhibited at the Singapore Biennale. Khotsouvanh is well known domestically as an artist of traditional landscape paintings in Laos and watercolor paintings ethnic minorities. At the same time, collage works of newspapers dealing with issues facing modern Laotian society are also well known to curators outside the country. Phothyzan's representative works are lands art works created with an awareness of problems with the natural environment that are destroyed as a result of development, installations using unexploded ordnance and so on.

Other internationally artists include Marisa Darasavath, who has exhibited at the Fukuoka Asian Art Triennale and the Singapore Biennale. Focusing on themes such as femininity and its representation, and mother and child, she has established her own style that mixes Western paintings and traditional Laotian techniques together, and expressive methods using extreme deformes and curves.

Following these international exhibitions in the Asian region, Laotian artists have gradually gained more exposure outside the country, as evidenced by the fact that they were elected to the ATP in 2018. “Elevations Laos”, a fund established as part of the social contribution activities of Australian companies, is expected to increase direct exposure to the works of the Lao artists by explaining how contemporary and dynamic art scenes will continue to develop and become more active in the international context. For example, it will host exhibitions and symposiums commemorating the first ATP exhibitions and symposiums of Lao artists and launch the Mekong Art Initiative, an art project by Laos collectors and curators.