Lim Sokchanlina – Communicate as it is Fusion of reality and unreality 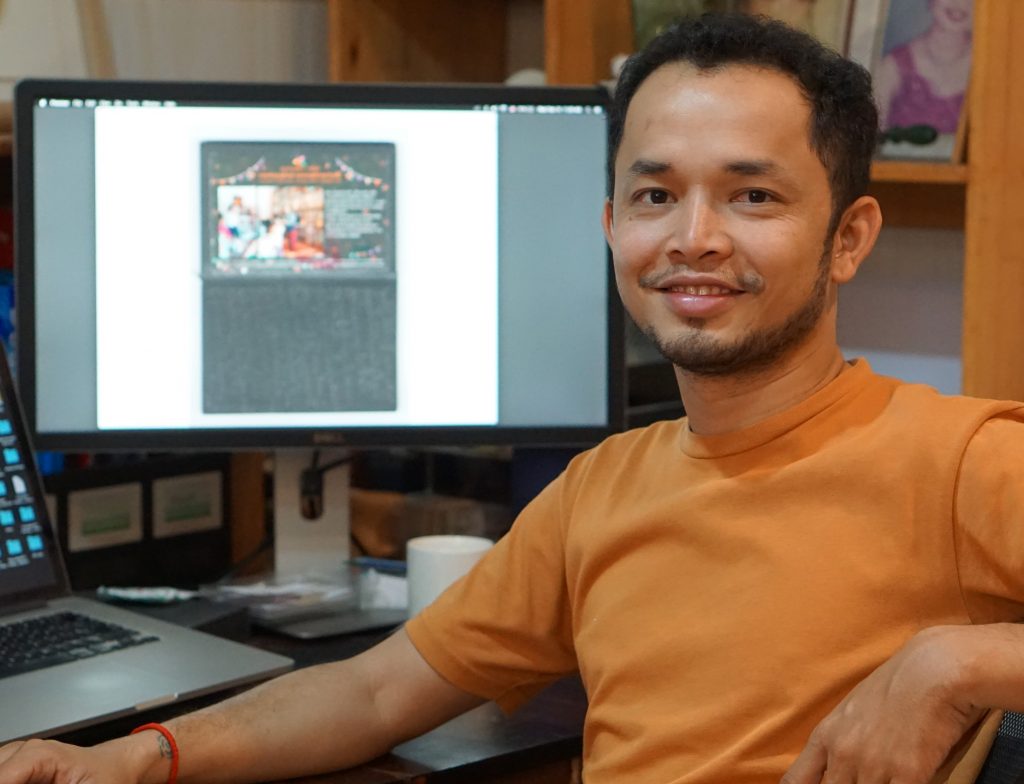 17 minutes 35 seconds on the seafloor

A man with a diving mask and an oxygen supply equipment is standing on the bottom of the sea. Holding sheets of A4 paper in his hand, he began to read a ‘letter’ written there in a muffled voice.

This is a scene from video installation Letter to the Sea (2019) by a Cambodian artist, Lim Sokchanlina. It is him who stands on the bottom of the sea. He also wrote the message on the paper by himself.

The video was filmed on the seafloor in Koh Koot Island, crossing sea border between Cambodia and Thailand. There has been an economic gap between those two countries, so Cambodian migrant workers head to Thailand to work in agriculture and fisheries as ‘cheap workforces’ even now.

There was a time that fishery workers, in particular, were exploited for wages while being forced to stay inboard for pelagic fisheries for a long period in a poor working environment.

Sokchanlina’s handwritten letter tells stories about those Cambodian migrant workers. He took interviews to collect those stories by himself. Someone got involved in an illegal drug to escape from his agony, and another one could not hold anymore and secretly escaped through a forest to return to his hometown. Their chagrin of not being treated as a human being just after crossing one border and their agony of holding out there for their family - Sokchanlina reads out their feelings on the seafloor where he is unable to breathe as he wants.

The words become bubbles and rise up. He inhales oxygen from the tank and makes bubbles over and over again. “These bubbles are messages from migrant workers. Bubbles can easily cross manmade borders and reach anywhere. Water leads to anywhere in the world. I wish that their messages flow freely as those bubbles do.”

“17 minutes 35 seconds. This is what matters in this work,” he said. He told us that it is the maximum time to finish reading 2 pages letter while inhaling oxygen. He cannot swim in fact. He practised diving for a week before filming. Despite being unable to swim and afraid in the sea, he insisted on depicting himself diving and producing bubbles by himself.

It does not have a scenario which most of the plays and movies have, moreover, there is no one except him in the video. A man stands on the seafloor and stays there. Every time he speaks incomprehensible words, bubbles are created and flown away. Only that. However, it does have a power which may come from Sockchanlina’s speciality; ‘fusion of reality and unreality.’

How to communicate the reality

Lim Sokchanlina was born in 1987, in Prey Veng province, Cambodia. With some influence of his uncle who is a well known painter, he joined photography class run by his uncle's friend who is French photographer. He became so interested from there while he studied economics at university. Later he worked in the photography department of a newspaper company for a while.

However, taking pictures of government officials, conferences and suchlike was monotonous for him. Even he took pictures of ‘a real aspect of society’ in front of him, he felt that it was a cut-off scene of a moment. Something was missing. “Isn’t it possible differently to depict society as it is?” he wondered.
It is certainly not only news which tells the reality. If we believe that ‘what we see is the reality,’ we may arrogantly lose the awe towards what we cannot see. Sokchanlina uses a real landscape and adds ‘something’ to it or removes what it should have included there. By doing this, he shows us the actual landscape with more reality and communicates his messages strongly and clearly.

One example is Wrapped Future II (2017 - ). He built a sky-blue metal fence in a beautiful lotus field. The vast lotus field spreads to the horizon, but our view cannot reach there because it is hidden by the manmade fence. He indicates in this work that rapid economic growth can ‘hide something behind.’
In Rising Tonle Sap (2012), he floated blocks of ice in the Tonle Sap lake, which is in the subtropical climate. This unusual and unnatural landscape provokes our anxiety. In this work, he warns us against creeping global warming, needless to say.

Meanwhile, in National Road Number 5 (2015), he amplifies reality by subtracting something from a news photo. The national road No. 5 in Cambodia is a highway which has been expanded and maintained with the support from Japan and China. Sokchanlina took pictures of houses of roadside when the residents had evacuated before the construction. There are no residents in the houses, which still retain traces of the owners’ lives. Those houses are tilted, or covered with metal sheets, or cut in half. We do not find residents nor the road to be constructed in the pictures. However, by looking at their houses, we can understand that their society will be greatly changing as the flow of people and traffic will not be the same after the road in front of them is expanded.

Sokchanlina says, “I do not want to judge the change happening there whether it is good or not. I want to depict the current state of our society as it is. So, I am thinking about how to communicate it better.”

Emigrants are one of the subjects Sokchanlina focuses on. The series Cambodian migrant workers in Asia - A conversation is his latest work on this subject. He saw workers emigrated to Thailand, Singapore, Malaysia, and Japan and has been making works on those people in each country.

The chapter of Malaysia is being completed now. Sokchanlina visited the Cambodian community working in Malaysia and handed them small black handmade books.

“What is your wish? Please write it down freely on there,” he asked, and almost 80 people responded to his call. Their wishes were written in white letters on black pages. “Everyone says, ‘I want to go back to Cambodia.’” Some want to go back to their hometown and meet their family. Others want to open a shop or a hair salon or drive a car in their hometown. Having modest wishes, they continue working in a foreign country.

He made those books special by making them the size of a Cambodian passport. “Their passport is the most important thing for them when they live abroad and want to go back to their hometown. Equally important is having a wish. No matter how poor and distressed they are, they can have a wish. By having a wish, they can keep working there. Wishing is their passport”.

Sokchanlina visited migrant workers’ hometowns following their handwritten wishes. He saw and took pictures of their families, shops and towns, and he put these on their books respectively. Instead of the migrant workers being unable to go back to their hometown at the moment, he realised their wishes by taking pictures. In this way, his black book project was produced and titled "I Wish I Want To".

This must be a fantastic fusion of reality and unreality. Migrant labour represents reality because it exists. Migrant workers’ wishes represent unreality because they have not come true. What Sokchanlina wants to tell would not be his judgement on migrant labour or his judgement on their wishes. What he wants to tell might be that there are people working aboard and wishing modestly to go back to their hometown, and they do it for their families in their hometown. “Our country is supported by those people’s mind and it is a reality. I want to communicate their modest voices straightly,” he wished.

When looking at Sokchanlina’s works, you might feel his sympathetic eye onto ordinary and powerless people. Living through the rapidly changing post-war Cambodian society, which influenced people’s mind, he listens carefully to the fading voices and communicates them. His attitude towards those voices is artistic and adequately journalistic at the same time.