Sonny Nyein: The Man Who Sees the Superiority of Space 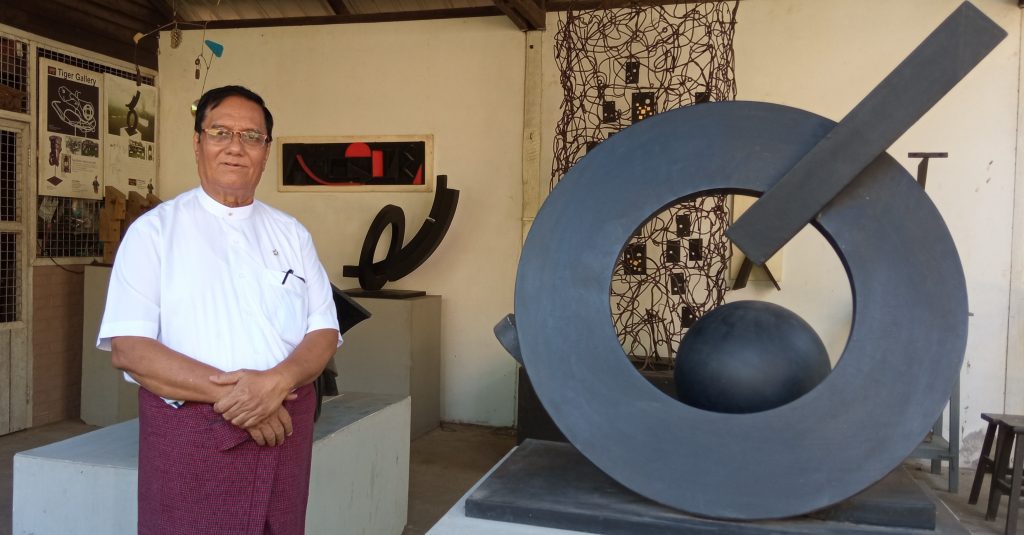 Virtue is preserved by immortalizing deeds of devils in arts. Just like the angsty lines in Macbeth, and of all the sickening scenes of King Ajatasattu torturing his own father to death in his lust for throne, Sonny Nyein’s sculpture Thorn (2007), casts the most monstrous crime man can commit to his own kind in a legendary manner. A huge pointy knife-like plane cuts through the body of an assemblage of steel bars and plates – which by its nature, can symbolize many things or simply be an abstract. Sonny Nyein himself identifies the form as “Ami Myanmar Pyi” (Our Mother Land Myanmar); her life has atrophied into mere bones, not only from the thorn lodged in her heart for decades, but also the trauma of gun reflected in her eyes.

The strength of Sonny Nyein’s sculptures can be felt in the strength of elemental truth they embody, of nature, materials, and our society, by means of modernism, particularly his affection for negative space. His 2017 work, The Pillar, balances two wielded oblong forms – one of them bearing a small arc-shaped piece within the hole in its frame – on four tall legs, supports Plato’s idea of family balance as being the model of the balance of larger world. When he found a driftwood, which, he says, “has been refined by currents of all violent and smooth natures, along its ragged courses, and now complete in itself,” he honored the beauty of its bravery by adding up “spaces” along its length.

However, the works of one of the few famous modern sculptors in Myanmar are at their most striking and complex when they take up hard political substances. It is easy for most Myanmar people to find their own home – insecure, terror-stricken and void of human rights – in the shadow of Thorn. Then, there is his 2018 work, Two Forms – a heavy cube of pressed cans and a mere outline of cube shaped by connecting thin metal bars together, standing next to each other on their own pole like two divine beings – which carries much more gravity. “One possibility is that”, Sonny Nyein says, “the whole sculpture contrasts the power, as empty as the cube outline, finally transferred to the civilian government after 2015 general election, to the deadly working power in the military’s hands.” But Two Forms can be conveying something social: the two ways the haves and the have-nots perceive each other’s life, he adds. “I do not want to limit the perception of a viewer on my work by providing definition.”

There can be boundless things an abstract sculptor confides to his work, but creating something unexplained is none the safer in Myanmar than straightforward representation of sensitive subjects. Sonny Nyein was wrongly accused, in an exhibition at Moema Kha Gallery in 2010, of making a forbidden political form by then the all-powerful censorship, once the threatening force in the Myanmar art scene. They insisted that they saw a “dancing peacock” in Pure Form #1, while it is truly Sonny Nyein’s innocent experimentation with triangular planes (of metal and negative space). The situation forced the otherwise reserved artist to give a nearly an hour-long exposition, to the doubt-ridden censorship people, of the ins and outs of Pure Form #1.

You could imagine Sonny Nyein, who worked at the information department at the American for 20 years, weathering all this pretty well as much in his articulate, slow-speaking, composed and level-headed manner back then as he was today when he recalled it. And yes, no doubt, he would then be patient too; it seems that only the most terrible things, say military coup, can make him completely vexed. That was, what he says, the state of his mind had been, during the interview on this year’s Valentine Day – the 14th day Myanmar military has overthrown the elected civilian government in an unceremonious coup on February 1.
The inglorious day opened the third reboot of military coup in Myanmar, and Sonny Nyein, born in 1949, has experienced all those nightmares, with the same old plot and a mixed of old and new cast, ravaging his mother land. The 1988 military coup, he could eerily foresaw in his painting, His Master Voice, a year in advance: a woman in classic green costume is intently listening to records being played by a human-sized, green-haired monkey next to her. Its inspiration drawn from a popular Burmese phrase, “playing the old record”, used on occasions when people rake up the past, His Master Voice is not much a coincidence as a prescient creation, given that all the statements, announcements and speeches of all military coups in Myanmar are constructed with the unchanging vocabularies since 1962.

That explains the role of genetic inheritance in our society. Sonny Nyein’s father, Kyar Ba Nyein, a renowned boxer, had a soft spot for art, and regarded “boxing is a form of art”. So, when his father’s bust in a stunning boxing gesture, arrived at their home in 1964, Sonny Nyein’s inclination to arts has already been affirmed that he occupied himself for some day, trying to figure out the way, how he saw then “the miracle”, was brought to life. “I did not tell anyone then how badly I wanted to know about it. Instead, I kept the question to myself,” Sonny Nyein said. That finally sent him to the Sate School of Fine Arts (Rangoon) shortly after where he specialized in sculpture.

The name that appeared frequently during the interview was Bagyi Aung Soe, one of the founding fathers of modernism in Myanmar, to whom Sonny Nyein believes, he owes a great debt of gratitude. “He provided me much of the fundamental artistic knowledge and insights in my formative years. For example, the power of negative space in sculpture: I could only see its power, because of his invaluable great mentorship,” Sonny Nyein said.

“In my first meeting with him, he asked me, ‘what is sculpture?’ But my reply that a sculpture is an object made with wood, metal and such, did not satisfy him; he told me to search it out again. It was 1972 when the availability of art materials readily was out of question. I was just lucky to stumble upon Herbert Read’s The Meaning of Art showcased on a little street bookshop. I bought the book for five kyats at a time while the daily income of a person was three kyats on average, and rushed to Bagyi Aung Soe’s home promptly by bus. ‘A sculpture is a three dimensional object’: I gave him the meaning of sculpture I just learnt, and this idea of space in sculpture changed my way of seeing things forever.”

There is a homework in Sonny Nyein’s latest sculpture, Noble: an old model bicycle was seen as and turned into a vivid yellow artwork possessing all the features of a good bicycle, but its mobility degraded by a cluster of needle-like metal rods firmly attached to the surface of seat and pedals. As Sonny Nyein puts it, “although the bicycle is 75% useable, it’s been made difficult to ride on. Even if you choose just to walk and move it along instead, you won’t get where you want to go as fast as you can and want to be.” Noble not only transports us into another realm of sculpture where it is a movable, functional object, but also provides us a highbrow metaphor for the embattled Myanmar’s parliament in the last five years, a quarter of its seats being reserved for the military until the dictator overthrew the elected government. Noble is where we should start the conversation about ‘what is sculpture?’ and ‘Who is Sonny Nyein?’ Noble is what Myanmar politics is. Noble makes history.

Myint Myat Thu is a culture researcher, art critic and freelance journalist rolled into one. Her works regularly appears on Frontier Myanmar, the country’s prestigious magazine in English, in addition to Myanmar Times (English Edition), The Irrawaddy (English Edition) and ASEF Culture 360 (of Asia-Europe Foundation) as her former working partners.