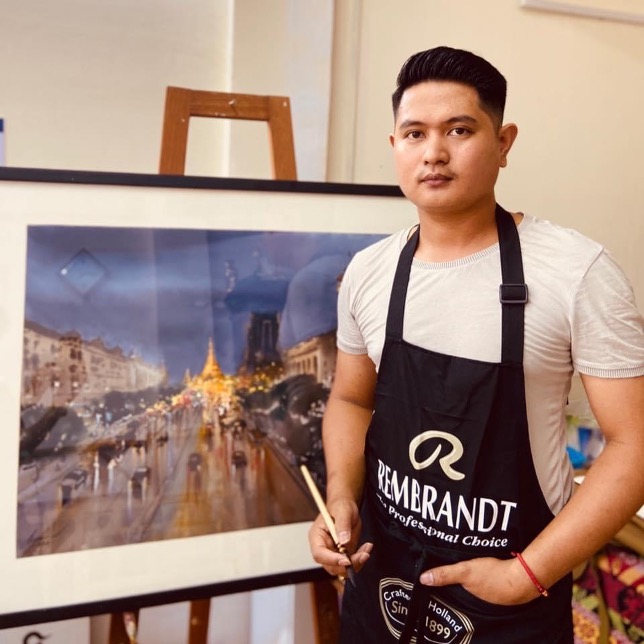 Life can be renewed at a deep orange sunset, at a dining table, at a pedestrian crossing, by a lake, in the silence, on a stormy night, by a rich watercolor. Yes, a rich watercolor because it mingles with, generously, for example, in the recent works of emerging watercolorist Aung Htet Lwin, the virtues of a good life: humble, autonomous, ethereal, ever-flowing, self-effacing natures and all. Above all things, however, when a watercolor, which is often bound to get underrated in terms of marketing value and artistic significance, honors a revolution of freedom and justice, it also tends to revolutionize itself in a sublime fashion.

Look at the highly charged anti-coup protest series, with which Aung Htet Lwin came into recognition since the early days of February 1 military coup. They bring out the formidable strength and energy – unmatched by the popular acrylic, oil and others – which usually lie dormant in the watery delicacy of the medium. As tens of thousands of anti-coup protesters flooded on the streets of Yangon, their revolutionary spirit seemed to seep into the artist’s paper, awash in multitude of colors which set the whole impressionistic sea of history in motion.

If there is anything that watercolor and revolution shares, it is that both are self-contained to evolve a shape of their own. “In watercolor painting, half of the job is done by the beautiful marriage of water and color while the artist’s conscious control over his own work can only have on the other half,” Aung Htet Lwin said.

And just as revolution, pursuing watercolor as a career, by a young artist from a modest family background, is a high-stake affair – even more so in a conflict-ridden country with art economy in ruin. Freshly graduated with a degree in painting from National University of Arts and Culture (NUAC), Yangon in 2015, Aung Htet Lwin Lwin had to trade paint brush for chores on film sets at a broadcasting company for a humiliating salary of 80,000Ks (just over $40 in today’s value). Hadn’t he been further exploited to run personal errands of, which he called, “elites on set”, that something of a misnomer “shooting manager” job would have taken away a promising watercolorist from us longer or forever. Now the young artist walked out only after three months and came back to us with his artistic license reclaimed. “At least, that gave me the experience and idea of what a salaried job is like,” Aung Htet Lwin said, with a broad grin.

Forget about preoccupation with concept and technique. Art is also about aesthetics and as much joy can be found in standing in front of a painting of highbrow beauty as an intellectually stimulating canvas.

Barbershop, a roadside barbershop scene from Aung Htet Lwin’s latest Retro series, is a blue-grey world away from our expectation of ordinary watercolor subjects done ordinary in Myanmar. But this one is a handsome barbershop, looking confident and cozy under dandy brushworks. Affordable and tiny without glass windowpane or even façade wall, it is rendered inviting with the presence of newspaper-reading men who may or may not be customers, just simply sitting on the front bench and reading.

“Everything in Myanmar is now spiraling downward back to decades, to the less developed past. The concept of Retro series has more association with this sentiment than apparent nostalgia,” Aung Htet Lwin said.

Then next into Sugarcane Juice Shop, from the same series. Life looks just as dim in here in greyer wash, the people similarly immersed in an unknown world away while time simply passing on its own. You can’t help but notice, in the painting, a faint sense of alienation, induced by the pandemics and the political bloodletting in the country, which has been infiltrating into our cracked social sphere today. The loose and shapeless nature of human existence seamlessly brought home to you by a watercolorist who has an implicit trust in the power of his medium.

To have come thus far as an artist at the age of thirty is to have a keen sense of one’s direction, and be set on it. There are, of course, more renowned and experienced watercolorists in Myanmar before and now. And Aung Htet Lwin, like many promising young artists in Myanmar, could have arrived further, hadn’t his ruling passion for watercolor been effectively kept unnurtured at NUAC. In reality, his story shared many hard facts about university art student life in Myanmar.

“I went to ask (the lecturers) if there was any dedicated watercolor class I could specialize in. There wasn’t and I failed second year because I failed in minor subjects which had nothing to do with painting at all,” Aung Htet Lwin recalled. “I would say I performed badly in academic studies. Minor classes took up the whole morning and by the time you had to learn the actual painting after lunchtime, you’re not as fresh as you would like to be.” That does not mean that he was present at minor classes – which, in opposite, he skipped particularly.

Dull university life, made up of memorizing theories and art techniques, is an antithesis of bringing up an artist. To survive in that setting is to add a bit of colors to it – such in the case of Aung Htet Lwin as organizing sports events and building bus-stop by rounding up juniors in the second year (which he was now attending for the second time) and his previous peers in the third year. His advices for formal art education in Myanmar? “(The authorities should) be well-informed of your students’ artistic inclination and help them pave the path on their own,” he said.

However, you can be called a bona fide watercolorist only after you could hardly afford to buy materials with what you sell, “lose urgent visions sometimes for running out of paints”, and yet remains a watercolorist at the end of the day. A foreign exhibition experience or two would keep your feet on the ground that “your highfalutin idea of art in Myanmar is still nothing.” You are also expected to be aware of some limitations of your medium that make you feel sometimes, as Aung Htet Lwin put it, “like a child while other medium are growing up into contemporary in parallel.” Maybe, “growing up” in watercolor tradition does not go through a process, but built up with hidden miracles of the medium an artist find in his lifetime.

Myint Myat Thu is a culture researcher, art critic and freelance journalist rolled into one. Her works regularly appears on Frontier Myanmar, the country’s prestigious magazine in English, in addition to Myanmar Times (English Edition), The Irrawaddy (English Edition) and ASEF Culture 360 (of Asia-Europe Foundation) as her former working partners.