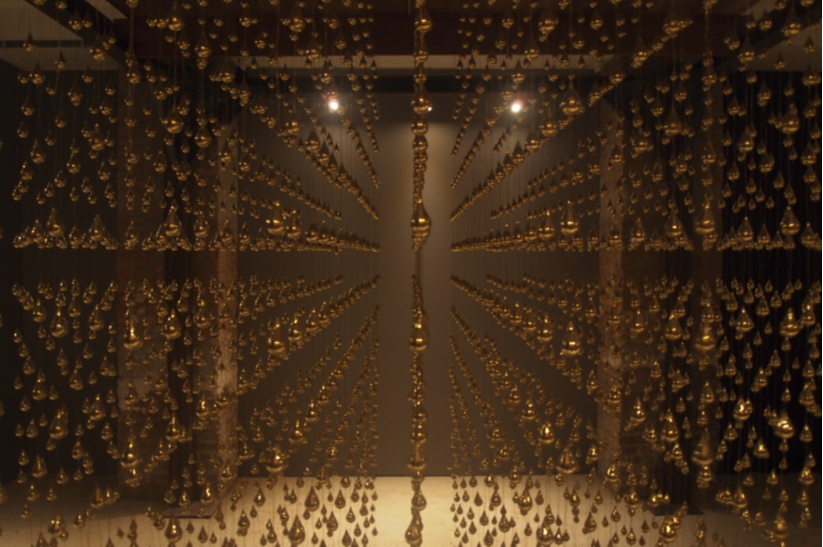 Drop of Sugar, Drops of Tears
The golden teardrop’s sweetness has hidden the bitterness, dis- appointment, and destruction caused by both betrayal and the uncertainty of life. The past, intertwining with the present, is told by small narratives to negotiate the arbitrariness of history. This exhibition, Golden Teardrop, consists of a twenty-eight minute film and a brass sculpture. The mass of golden teardrops hangs like falling rain drawn towards the earth. The supporting structure built from decommissioned factory steel, and the wooden dove- tail joints is from a nineteenth century Ayutthaya house.

The scattered events, in both the sculpture and film, make it diffi- cult to pin down their origin. Whether, it is the journey of a person of Bengalese-Portuguese-Japanese descent to Siam during the seventeenth century; the left over egg yolk from the starching of cloth in the fifteenth century; or, even the adventure of a Greek- Venetian sailor with a terrifying ending.

As if history is a container, all the past stories that flood together. They pierce through to create holes to let the past run free, and the seemingly isolated anecdotes merge together. They invite us to rifle through the layers to challenge history; arousing our desire for knowledge and percep- tion to understand circumstance that once was, but also that is, and what will be.

The gravitation and pressure of time weaves to- gether the stories from faraway territories like the trans-oceanic commerce of the Portuguese, Ca- tholicism in exile in sixteenth century Japan, or the mixture of dessert recipes between the Japa- nese and Portuguese: dissolving the luxurious sense of sugar, once only available to the aristoc- racy, became a household ingredient in the com- moner’s kitchen.

The aimless plot without strict planning, which de- scribes the terrible fate of a Greek-Venetian sailor, is echoed by Hisako, a Japanese woman, narrating her family’s personal history. This reflec- tion does not ridicule life or obstruct any course, for the past reappears as slow ripples that occa- sionally fade away.

The islands of small narratives attach to one an- other like boiling brass liquid poured into a mold to form a golden teardrop. As delicate as an ac- tual teardrop, covered in gold. Like an egg yolk solidifying when dropped into a brass pan of boil- ing syrup.

These stories arouse nostalgia and curiosity of its origin; many expand further into history’s grand narrative. The pressure and the gravitation upon these two narratives widen the boundary be- tween them, and for a moment, they allow for the isolated stories to encounter one another.

Truth and rationality do not depend only on a phe- nomenon, but rather the logic of the reader, audi- ence, and collected information unites these nar- ratives. As it is we, participating in these histo- ries, who float on the current of a stream flowing int o the ocean of narrative and memory.