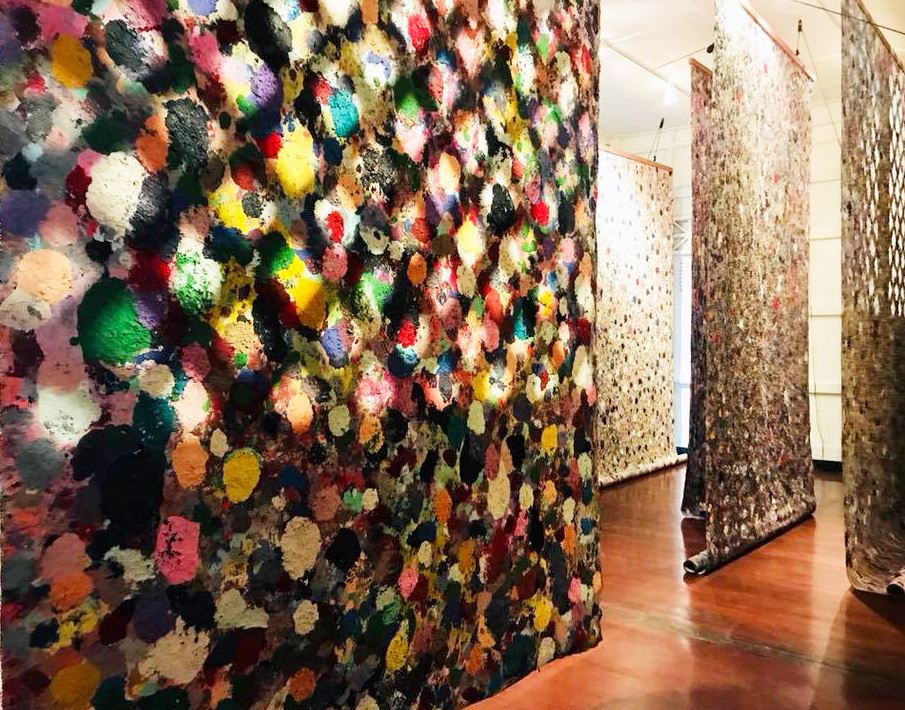 The art of the Thai kingdom, which continues from the days of Sukhothai Kingdom and Lanna Thai Kingdom has been involved with the support of royal patronage through its history. Among them, King Chulalongkorn (the Rama V) advocated Thai traditional arts and crafts to raise Thai Identity and its nationalism while incorporating Western cultures and styles.

During the reign of King Rama VII, democracy was introduced to the country and Thailand had moved from absolute monarchy to constitutional monarchy by the Siamese revolution, a group of liberals led by Pridi Banomyong in 1932. This incident was the beginning of history of a coup d'état in Thailand that has occured many times until the present. The liberals of the period used art and architecture as "symbols of a class-free democratic manifesto," and built many buildings with flat roofs along Ratchadamnon Road, in contrast to monarchy style architectures, and democracy monuments decorated with low-relief sculptures proclaiming the true history of Thailand. It is in our fresh memory that Arin Rungjang had exhibited his Sculptural Installation work “246247596248914102516” and a single channel video, “And then there were none” to indicate the the Democracy Monument’s ideological signification, current nation-state and its history.

Traditional Thai Art had its roots in Theravada Buddhism and Mahayana Buddhism (historically, mainstream of Buddhism), but its implications in the creation had a strong meaning of “benefiting” rather than “expressing”. An Italian-born sculptor Silpa Bhirasr, an art professor, established the Silpakorn University in 1943, where Western art was introduced, which gave rise to non-religious or personal themes to the art. At that time, however, the mainstreams of Thai art were in an eclectic style of Traditional image and crafts and influence of western arts in the field of architecture, decorative arts, live-action paintings, and printing.

Among them, there are a few unique artists like Inson Wongsam (abstract sculpture, painting), who graduated from Silpakorn University in the 60s and went on a road trip by a scooter by himself  from Bangkok to Paris with selling own artworks along the way and worked as a national artist after living in Paris and New York.

A major trend in the transformation period of Thai contemporary art stems from the foundation of Chiang Mai University in the mid-1970s, and the start of active role by artists who had studied in Western countries and returned to Thailand since the mid-1980s, such as Montien Boonma (Asia-Pacific Triennial of Contemporary Art Brisbane 1993, 2002, Deitch Project, New York 1997, 51st Venice Biennial, 2005), Araya Rasdjarmrearnsook (51st Venice Biennale 2005, Documenta 13) , Apinan Poshyananda (Director and the Founder of Bangkok Art Biennale), and Kamol Phaosavasdi (50th Venice Biennale 2003, Echigo-Tsumari Art Triennial)

Devid Teh, a professor at National University of Singapore and an internationally known contemporary art curator, says that in Thailand, it was difficult to live as a professional artist in the 1980s without the status of a member of "Silpakorn School" fitting in a “bourgeoisie consumption of – image of  traditional, of which craft was a key signifier”.  Then two new streams : the Bangkok School, the artists in the Metropolis that have returned from the West, and the Chiang Mai School, the artists in northern city also returned from the west started gaining prominence.

In the Bangkok School, Bhrasri Institue of Modern Art (BIMA), founded by the Patron Group which included Princess Pantip Parbatra Chumbhot in 1974, started an exhibition to incorporate artists other than the established Silapakon School, and Apinan Poshyananda, who returned from the UK, was chosen as the first national artist of the year in "How to Explain Art to Bangkok Cock" (1985), and the first conceptual art exhibition (Folk-Thai-Time Exhibition, 1986) was held by the curation of Chumpon Apisuk, and many performance arts, installations, process arts, such as Kamol Phaosavasdi were introduced. BIMA took a great role in the sense of creating a flow free from the established artistic frame.

On the other hand, in Chiang Mai, a northern city of Thailand, there were no opportunity for artists to exhibit contemporary art at that time. In this situation, Montien Boonma who had been studying in Europe after graduation from Silpakorn University in the late 1980s and had started his bright carrier internationally, returned to Thailand from France, and Araya Rasdjarmrearnsook returned from Germany and both began teaching at Chiang Mai University, creating an opportunity to expand experimental style arts and artists networks with foreign countries. (From their students at that time, large number of internationally-known artists were grown such as Tawatchai Puntusawasdi.)

And a major turning point was the presence of Chiang Mai Social Installation (CMSI), which began in 1992. Mit Jai Inn(Sun Shower in Tokyo, 2017, Sydney Biennale, 2018), who also went abroad in the '80s, traveled to Germany as a traveler, selling paintings on the roadsides, as did Inson Wongsam in the '60s. After entering Academy of Fine Arts in Vienna, he returned to Thailand in 1992, and started an exhibition in a form that did not rely on established organizations, referring to the exhibition, he participated in Vienna, using the temple festival rooted in Thai culture with Uthit Atimana. In a manner that involves the general public with freedom of expression, CMSI had exhibited many community-dependent works and works of many artists from all over the world till its last exhibition in 1997.
CMSI invited many artist from local and overseas, such as Navin Rawanchaikul (MoMa PS1, 2001, Venice Biennale 2011) who has been practicing community based art works in public, Rirkrit Tiravanija (MoMa 1997, The Solomon R. Guggenheim Museum 2004, Serpentine Gallery 2005, Grand Palais 2012), who is an iconic figure in "Relational Aesthetics" advocated by Nicolas Bourriaud, and created a foundation for establishing Contemporary Thai/Chaing Mai art culture, and thereafter, various activities such as Land Foundation by Rirkrit, Mit and Kamin Lertchaiprasert (Parlais de Tokyo, Paris 2015, the founder of 31st Century Museum) has became abounded. The great significance of this era lies in the voluntary activities of artists without relying on institutes.

David Teh describes in his “Artist-to-Artist Independent Art Festival in Chiang Mai 1992-98” the symbolic events of this two groups: the tide of Silpakorn school and the aforementioned new tide of art. (An incident in which Mit Jai Inn was arrested for handing out a flyer criticizing Thawan Duchanee, the most famous artist of a Neo Traditionalist, for making statement as "He is Sold Out" at an exhibition at the Oriental Hotel in 1994, in which the Prime Minister Chuan Leekpai attended.)

Mit Jai Inn is currently active at various exhibitions, including international exhibitions and biennales, but he is also known as a political activist. In the history of a coup d'etat that has been occurring regularly in Thailand since 1932, he has also participated as a protester in Black May (a suppression incident in which a crowd assembled for protests against the military regime of Suchinda Kraprayoon in 1992 and caused many casualties).

He is also running a gallery and held exhibitions of politically profound artists in within the N22 Art Complex, which is next to Gallery Ver established by Rirkrit and his partner. The current Prayut regime in Thailand was a post-coup d'etat military regime in 2014. And Elections, regime criticisms, and demonstrations has been prohibited until the nationwide election in 2019. As well as other Southeast Asian countries, art is censored at some extent in Thailand. Today, many artists continue to develop works on the theme of politics over the unfairness of the current election system and their political policies.

The gallery scene trend in Bangkok has changed from alternative gallery to white cube gallery in the recent years, and the number of gallery has increased considerably. Visual Dharma Gallery, founder, an Austrian expat, Alfred Pawlin, pioneered Thai contemporary art scene. (Magic Set Exhibition I, II, Melancholic Trance, New Art From Chiang Mai 1992 ~ 1993) It held the exhibitions participated many artists from Chaing Mai such as Mit, Montien, Navin (assistant of Montien at the time) and Tawatchai, and various works such as avant-garde installations, mixed media, and video performances were also introduced.

From this era on, many worldwide leading artists of next generation have been resurging, such as Apichatpong Weerasethakul (Grand Prix 'Un Certain Regard' at the 55th Cannes International Film Festival), Arin Rungjang, (Documenta 14, Venice Biennale in 2013), and Pinaree Sanptak(LACMA 2013, Yokohama Triennale 2005), and the Thai Art scene has established prominent position worldwide.

Also, some art spaces in University, such as The Art Center Chulalongkorn University (1995-2017) and Bangkok Art University Gallery in Bangkok, run by Petch Osathanugrah (a well-known art collector ) and curater by Ark Fongsmut (Singapore Biennale 2013)  at Bangkok University, have also played a vital role in the Thai art scene during the transitional period by hosting the exhibitions of artists from Thailand and abroad, including young artists projects (Brand  New Project 2004 to Present). These gallery space are recently closed and the closure of such spaces will be missed.

Recently, MAIIAM Museum launched by Eric Bunnag Booth (Director of MAIIAM Museum) in 2016 with, Jean Michel Beurdeley and Patsri Bunnag, attracted great public attentions by showing their private collection of more than 30 years and held various exhibitions, such as an exhibition of Patani region “ Patani Semana 2018”, Co-curated by Gridthiya Gaweewong, Kasamaponn Saengsuratham, Kittima Chareeprasit and Ekkalak Napthuesuka, controversial  town located on the Malaysian / Thai border and claiming over 3,000 casualties between Malaysian Muslims through the history.

Art institutions of Thai's neighboring countries of Asia, such as Japan, Australia, and Singapore also contributed significant role in Thai contemporary art from the 1990s. The Fukuoka Asian Art Museum has held the Fukuoka Asian Art Triennale since 1999 and has stored and exhibited many works from Southeast Asia. The Queensland Art Gallery in Brisbane, since their hosting of Asia Pacific Triennial (APT) in 1993, and the Singapore Art Museum (SAM) since its foundation in 1996, have been a major dynamic for raising the profile of contemporary Asian art with a focus on Southeast Asia.