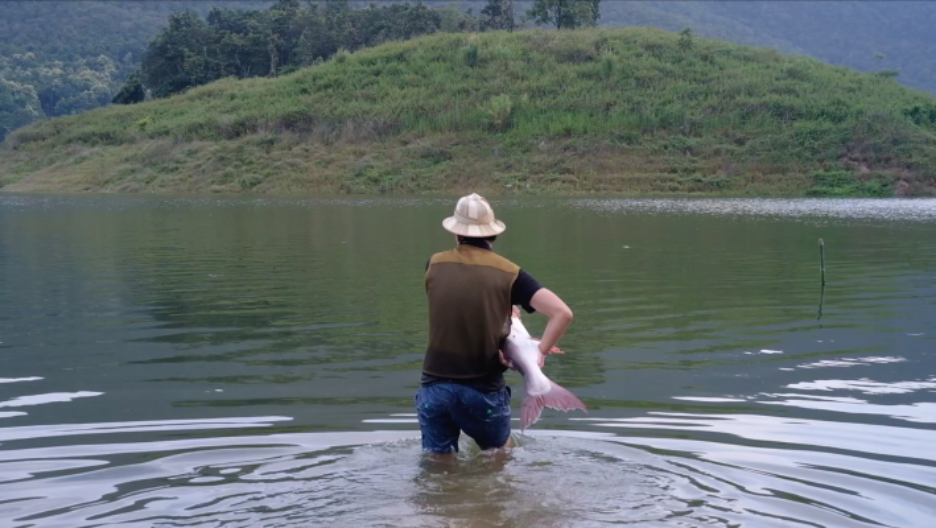 The artist stayed at Compeung, an artist-in-residence in Chiang Mai, Thailand, for one month in August 2018. In August 2018.While interacting with the local people deep in the mountains of Chiang Mai, he conducted research on the Mekong giant catfish that lives in Thailand. This film captures the relationship that the Mekong giant catfish has with the Thai people through the artist's own personal experience. The video is developed in a documentary style, but with a scenario that refers to the Thai practice of Tambun, using Zen paintings such as the Zyugyuzu and Hyonenzu as motifs. “Tambun” is an act of virtue by which the faithful purchase small fish in buckets and release them. The act of the young man (the artist) who goes in search of catfish in the film, finds catfish in a large dam and lets them go is depicted as the structure of Tambun transformed in scale.
At the same time, the video provides an opportunity to think about the lives of the villagers and their religious background in relation to the Mekong giant catfish. This video was presented in the installation work of the solo exhibition "Pangasianodon gigas" at Kyoto City University of Arts Gallery @KCUA from February 16 to March 3, 2019.