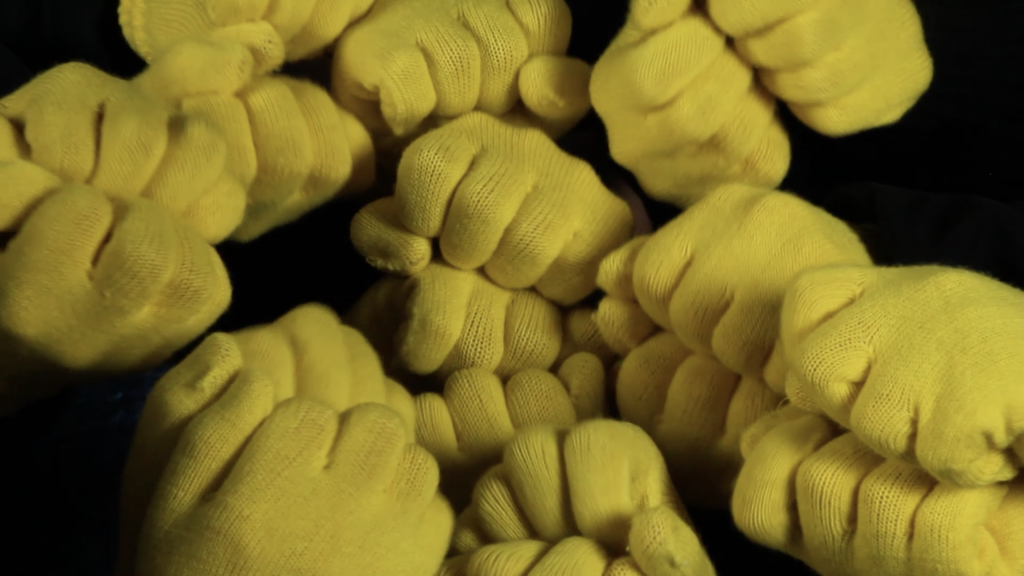 Product outline
Shione Yamada, the director of this video work, focused on the dynamic movements of slime molds (myxomycetes) and tried to imitate them using humans. Her attempt contrasted with the simple personification of slime molds. What is the “world” that humans see when tracing slime molds with their bodies? The performers tried to imitate the pulsations of slime molds in various ways to obtain the “umwelt” of slime molds. For example, they used yellow gloves to imitate Fuligo septicaʼs rhythmic transformation from amoeba-like plasmodium to mushroom-like fruiting bodies or danced to show the appearance of the changing colors of Stemonitales. In this work, the sound was also elaborate. In nature, it is impossible for humans to hear the sound produced by slime molds. However, when they move, slime molds vibrate the air, certainly making noise. The performers tried to represent these sounds using human voices while imagining the resonances. The performers used voices in accordance with the movement of the slime molds, and Yamada repeatedly collected and remixed them. A mysterious and fascinating sound was then created.
In this video work, Yamada eliminated descriptive words as much as possible. There is a limit to expressing the vividness of slime molds using descriptive language. She dared to edit without descriptive narration or subtitles in order to bring to the fore the powerful vitality of slime molds that normally spill out of languages. With this video work, Yamada boldly attempted to deeply enter the microscopic world of slime molds and to draw out the “breath of life” as a fundamental impulse shared across species.
In addition, this video work was produced as part of the “Omoriyama Art Project 2020,” which was a joint project of Akita University of Art and Akita Omoriyama Zoo.