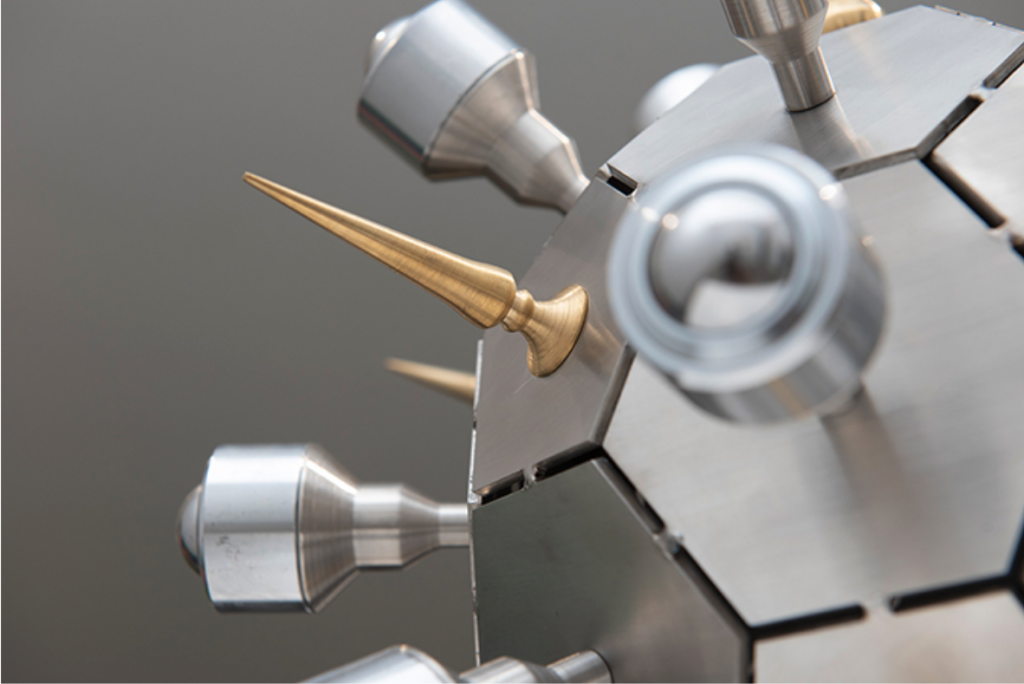 Galerie Quynh is pleased to present A Dream Of The End At The End Of A Dream, an exhibition by Tuan Andrew Nguyen and Wowy.This highly anticipated show is their second with the gallery, the latest in a wide range of collaborations since 2008’s Quiet Shiny Words/Cultural Doppelgangbangers, where the artists explored subcultures in the contexts of Vietnam and America.

13 years on, the artists’ fascination with the flows of culture and commodity has morphed into concerns for the future: What becomes of Earth when its last man dies? The befogging landscape of a world on the edge of human extinction is rendered as vast, colourful murals, as taut silk marked with blood, as fantastical sculptural forms...  The narrative anchor to these varied artistic approaches is the titular film, which, amid apocalypse, centres around an unlikely conversation at a bar. Wowy, in the role of the lastman on Earth, plays a drinking game with an unknown entity – one not quite cyborg nor hologram, so “like a God, or something”. The more they discuss the end of humanity, the more Wowy is disoriented. As the scenario unfolds and frustrations build, filmic dialogue becomes poetic verse.

For Tuan Andrew Nguyen, whose practice fuses fact and fiction to create hybrid narratives, and Wowy, among other things a writer and performer of poetry, textual elements maintain a powerful presence in their latest body of work. In Mindmap of Mayhem, the artists’ digital- turned-analogue exchanges are layered on top of a doomsday map, created by “futurist and spiritual visionary”Gordon-Michael Scallion after having had a psychic episode in  the  early 1980s. Painted text messages – ruminations on “who is guilty?” – are interspersed between Scallion’s vision of a world underwater. As a project mind-map, the meanderings andmiscommunications in Mindmap of Mayhem provide viewers with clues to navigate the exhibition that are playful at times, sobering atothers. Nguyen relays the question: “can we imagine a world where [...] increased social freedoms and eco-positive approaches that embrace indigenous wisdom [...] may co-exist?” Sculptures, with bamboo rods and incense fanning out from concrete and steel, stand in dialogue – perhaps as answers, perhaps as mere speculation.

Delving further into the possibilities of this “co-existence”, Nguyen and Wowy propose the inherent contemporaneity and futurism of particular techniques, the most salient being blood painting, done here using Wowy’s own blood. Painting with blood dates back toprehistory. In Blood Stains Still Remain and Prayers To The Heavens, painting with blood inescapably dates forward to the future – ameans for the last man on Earth to leave behind his will and final prayers. The artists’ application of Wowy’s verses in geometric patterns is humorously self-aware: the canvases may well become indecipherable relics in the vein of hieroglyphics, or crop circles, oreven Stonehenge for the beings that occupy Earth after humanity’s demise. The gesture is also a humble acknowledgement that manyfutures exist beyond the end of the Anthropocene.

A Dream Of The End At The End Of A Dream is apocalyptic, but far from dystopian. The last man lays to rest as the film’s cyborg-deity reminds us: “The end of humanity is not the end of the world”. As we get nearer and nearer the end, the exhibition invites us to imagine a future that holds other possibilities for the objects and spirits that survive us.

Tuan Andrew Nguyen’s practice explores strategies of political resistance enacted through counter-memory and post-memory. Extracting and re-working narratives via history and supernaturalisms is an essential part of Nguyen’s video works and sculptures where fact and fiction are both held accountable.

Nguyen founded The Propeller Group in 2006, a platform for collectivity that situates itself between an art collective and an advertising company. Accolades for the group include the grand prize at the 2015 Internationale Kurzfilmtage Winterthur for the film The Living Need Light, The Dead Need Music and a Creative Capital award for their video project Television Commercial for Communism. Besides a major travelling retrospective that began at the MCA Chicago, the collective has participated in international exhibitions including All the World’s Futures, Venice Biennale 2015, Venice, Italy; Prospect.3, 2014 New Orleans Triennial, New Orleans, LA, USA; Made in L.A. 2012, Venice Beach Biennale 2012, Los Angeles, CA, USA; The Ungovernables, 2012 New Museum Triennial, New York, NY, USA; and 7th Asia Pacific Triennial of Contemporary Art, Queensland Art Gallery, Brisbane, Australia.

Wowy is recognised as one of the most influential hip hop artists in Vietnam, and especially following his role as a coach on Rap Việt – a competition for emerging hip hop artists. His music, which blends modern rap with Vietnamese cultures, speaks to the challenges of living in poor neighbourhoods and the social taboos of our time – reflections on his humble upbringings.

During his career as a hip hop singer-songwriter, Wowy has received numerous accolades for his work, including the Top 10 Favourite Song of the Year, Green Wave Award; Most Liked Rap/Hip Hop Song, Zing Music Awards; Top 1, #zingchart; Top 1, YouTube Music Trending for his song “Thiên Đàng”. He also became the Winning Coach on Rap Việt when his mentee Dế Choắt became the Finalist. In 2014, Wowy won the Western Digital’s Project: Sci-Fi Film Challenge in Vietnam for Best Actor for his leading role in The Last Generation by Thibaud Taillant. In 2019, he played a supporting role in Ròm by Tran Thanh Huy, which won the 24th Busan International Film Festival for New Currents Award, as well as wrote its theme song “Chạy”.

A Dream Of The End At The End Of A Dream

営業時間
10am - 7pm Tuesday - Saturday and by appointment