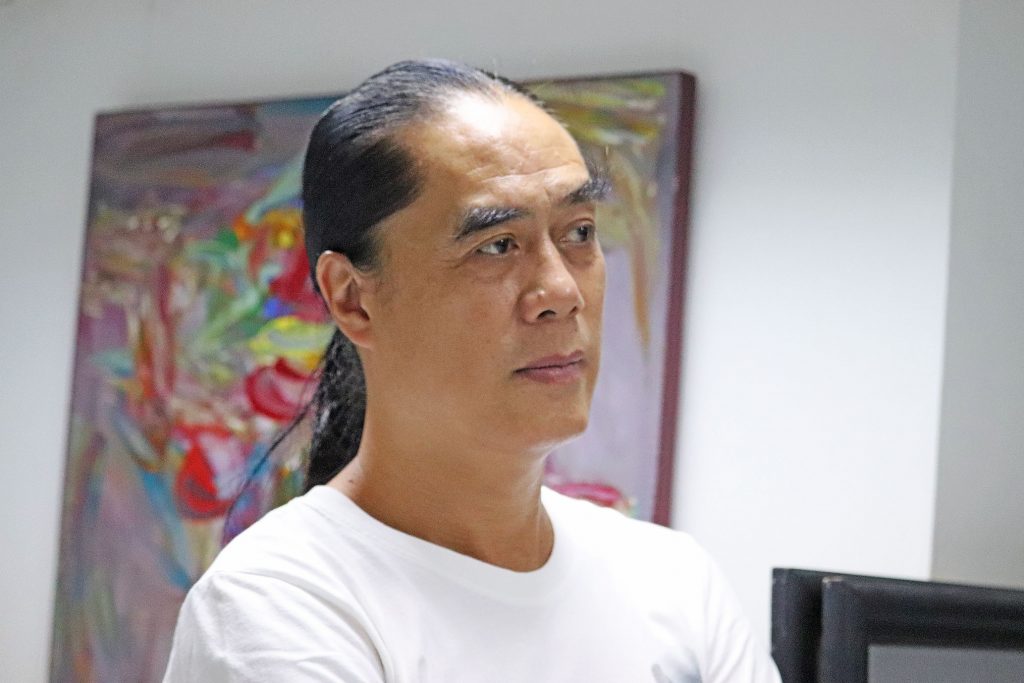 “Thank you for waiting.”

The hand that he offered for a handshake was rather large, his palm soft and cushiony like feather duvet, despite the firmness of his grip.

The man who greeted us is Aye Ko, a leading artist in Myanmar’s contemporary art scene. His life, as well as his works, are deeply and inseparably bound to his home country’s democracy movement.

Aye Ko was born in Pathein, capital of the Ayeyarwady region in southwestern Myanmar, in 1963. His family sold sandals for a living, which he helped out after he graduated from school. Despite the lack of artistic background in his upbringing, why did he choose to pursue art?

“I had an admiration for owning beautiful paintings. But they’re expensive, aren’t they? So, I decided to draw them myself, and began training under the master painter, U Min Soe, when I was 21,” answered Aye Ko, with wrinkles framing his large eyes as he smiled. He painted realistic depictions of flowers and landscapes at the time.

Around the same period, however, Aye Ko also began joining the rest of Myanmar’s young population in a democracy movement that swept the country. Chased out by law enforcement, he left Pathein and headed east to Yangon, specifically to the Inya Art Gallery, a place symbolic for cultural resistance. The gallery was led by Aung Myint, a driving force for Yangon’s modern art world.

Pondering about art and politics behind prison walls

As Aye Ko found his new home, he immersed himself in abstract paintings. In 1990, he founded Modern Art 90, a collective with fifteen other artists. His endeavor, however, was perceived as political, which led him to his incarceration. Imprisoned in a barren cell with nothing but a sheet of blanket and a toilet, the only thing that helped him get through was his mind: meditation and contemplation. He thinks that he gained a lot from his three years in prison.

“For one, I learned how to control my thoughts and feelings. It was a skill I needed to acquire in order to survive in the harsh environment. The other thing was that my purpose in life became clear to me. Strangely enough, it was those years in prison that I deepened my understanding of the relationship between art and politics.”

Staying and making with love of his country

Aye Ko was released in 1993, but his imprisonment has shattered his family and ground his family business to a halt. No one around him offered to help for fear of the police, and many a day he drowned his sorrows. Even then, after four to five years, things took a turn for the better and his passion for art flared again. This was when he began to devote himself to performance art using mediums such as videos.

However, as the military administration continued to suppress the arts, many artists moved outside of Myanmar in search of a place to express freely. Why did Aye Ko choose to stay?

“It’s simple. It’s because I love Myanmar. I was afraid that I might be sent to prison again, but I didn’t have a choice but to do what I had to do.”

Later, Modern Art 90 was renamed the New Zero Art Group in 2000, with the intention of creating a new movement in the new century through the integration of topics such as politics, society, and art. In 2008, the collective opened a gallery called the New Zero Art Space.

Raising the next generation

Progress was made toward democratization during the 2010s, and censorship was abolished. In 2016, Aung San Suu Kyi’s National League for Democracy (NLD) became the governing party, ending decades of military rule.

“A long-awaited ‘civilian government’ is now in place, and there is no need to fight against the government anymore. I am now working on things that must be done in order to rebuild our country.”

Today, many young artists gather in the New Zero Art Space, and on weekends, the gallery hosts art classes taught by Aye Ko. He has discovered a new passion of educating the successors of Myanmar’s art world. He also offers art classes for children living in the suburbs and works to pass traditional craft techniques onto the next generation. Formerly the standard-bearer for protest art, he now steers the country towards the future. But at the end of our interview, he also said this:

“If our government goes sideways ever again, I might have to come back as a performance artist.”

Back in the day, his performances were filled with blood, tears, and pain. I cannot help but sincerely hope that his warm, duvet-like hands will stay that way.