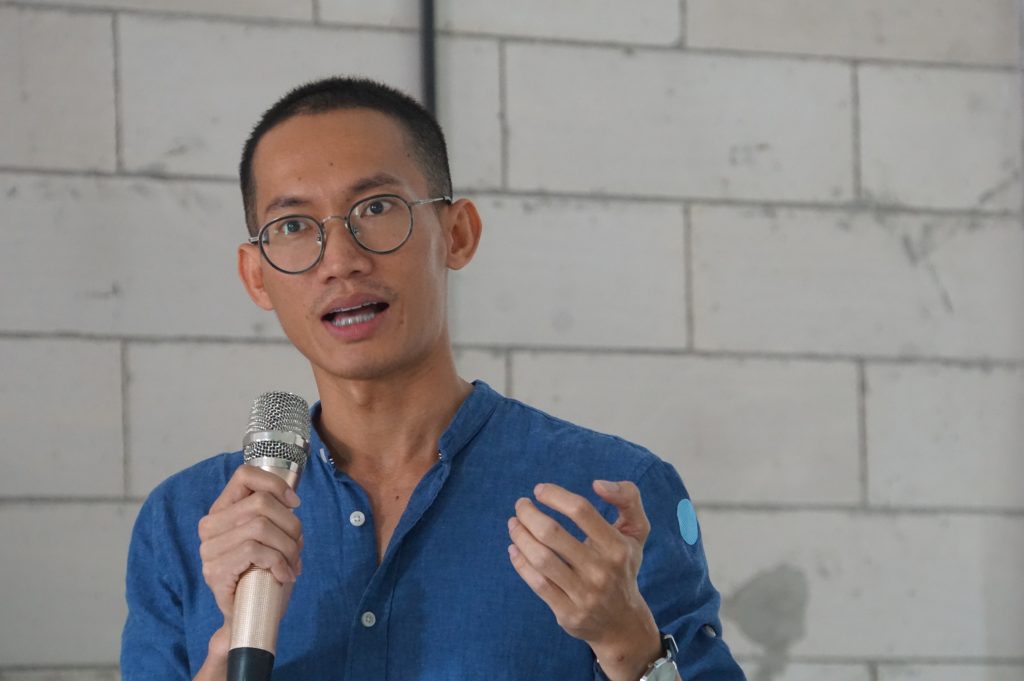 Sa Sa Art Projects, which supports contemporary art leaders in Cambodia, is holding an exhibition and auction of local and international works of art in the capital Phnom Penh. Partly to help prevent the spread of the coronavirus, the auction has been set up on online and can be attended from anywhere (givergy.us/sasa2020). The exhibition is open until 30th November, and the auction is open until 4th December.

Number of participants showing the spread of activities

The venue, 'Factory Phnom Penh', is a unique facility in which a former factory was converted into an exhibition venue, event space and co-working space. Sa Sa is holding an auction there with 45 pieces of contemporary art by artists from Cambodia, Thailand, Vietnam, Indonesia, Myanmar, and other parts of Asia. Works by 38 young Cambodian artists are also being exhibited and sold.

There are various works to be auctioned, such as paintings, photographs and installation. Some of the works are by artists who have been the focus of international art exhibitions in the past. 50% of the proceeds will go to the artist and 50% to funds for Sa Sa's activities.

According to one of Sa Sa's founders, Vuth Lyno (38), himself an artist and researcher of contemporary art, Sa Sa also began as an auction in 2010.“Ten years ago, we started with thirty Cambodian artists. This time we were able to collect works by 54 domestic and thirty international artists.” He says, “This auction makes us feel very emotional because it is our growth trajectory that shows how our activities have expanded over the past ten years.” It is not just that the number of people and works have increased. He says he was also moved by the fact that artists were connected to each other through art, beyond the boundaries of their countries.

However, the community that supports and nurtures contemporary art in Cambodia is still 'very small', he says. In order for artists to grow, there must be people who are receptive to their ideas. It is necessary to nurture a community that is receptive and willing to listen to what is being said. Sa Sa was created to bridge the gap between artists and the community. Lyno says it would be great if as many people as possible could come into contact with art and deepen their understanding of art through these exhibitions.

The Power of Contemporary Art

According to Mr. Lyno, who also studies the history of contemporary art, it is said that it was a photo exhibition of people in an interrogation centre during the Pol Pot era that caused a stir as 'art' that Cambodia presented to the world after Cambodia's civil war. 'Photographs from S-21: 1975-1979' received a lot of attention, including a debate about whether it was appropriate to call the pieces 'art'.

S-21 was a 'political prisoner' interrogation centre in Phnom Penh, opened by the Pol Pot regime that ruled Cambodia between 1975 and 1979. In just under four years, about 12,000 people were detained, tortured, and slaughtered there on the outskirts of the city on innocent charges, for which records have now become available. At the time, the prisoners who were taken there were photographed from the front without being told anything, and the photos on display at MoMA show the anxious faces of those arrested, unsure of what their fate was going to be.

It is said that only seven people survived in this centre. After the fall of the regime, one of the survivors, Vann Nath (1946-2011), continued to paint the conditions in the interrogation centre. His paintings that vividly depicted the torture and inhumane conditions of the centre, are not only works of art, but also valuable historical records, and are on display in the 'Tuol Sleng Genocide Museum', which was established on the site of the centre. Mr. Lyno considers this to be another form of contemporary Cambodian art.

After more than two decades of conflicts and clashes, beginning in the 1970s and including the Pol Pot era, Cambodia has cruelly destroyed Asia's most advanced culture and the art that had been produced in the country before the civil war. It is perhaps ironic that the first step in that 'artistic revival' was the documentation of one of the most brutal periods in human history in the form of photographs and paintings.

But conversely, even in the midst of long civil wars and harrowing experiences, humans have had the ability to express that intense pain, inscribed in their hearts and minds. For what purpose,  Lyno says, is to overcome the past and“to have hope for the future”.

“Contemporary art is a human creation, so it is only natural for it to reflect the society we live in”says Lyno. This year's exhibition also includes works that deal with social issues such as environmental destruction and poverty that are occurring behind rapid economic growth. “Through art, we nurture the ability to see, think, and analyze society, and we can express them freely in our own way. Through such creative activities, I believe that people will develop the ability to think for themselves and choose their own future.”

A society that embraces diversity through the arts

“However, contemporary art does not necessarily have to reflect society or politics, it can be something that transcends reality”, says Lyno, “It can also be something that transcends reality. In other words, the most important thing in art and society is to embrace diversity. There is an infinite number of ways of thinking, feeling and expressing oneself. If we allow room for infinite possibilities, our society will shine brightly.”

Today, Cambodia is still not always tolerant of freedom of expression. In particular, it is often necessary to refrain from speaking out on political and social matters. However, Mr. Lyno believes that art can be a means of communication at such times. “Art is not a direct criticism or statement, but it is an indirect expression of various phenomena and messages through the artist's sensibility.” How it reaches the viewer's mind is up to the viewer's sensibilities. It is a communication between the artists sensibility and viewer's one through works of art. Lyno considers there is a message that can be delivered, because it is not a straightforward verbal or visual exchange.

Due to coronavirus, which has been raging since early 2020, various artistic activities have been restricted around the world. In May, in the midst of the pandemic in Europe, German Chancellor Angela Merkel drew the world's attention to the fact that “The German government has put support for the arts at the top of its priorities”highlighting the fact that culture is an essential element of humanity, even in the face of the Covid-19 pandemic.

However, the German way of thinking is rare and the reality is that in many countries the arts are still not a high enough priority. Particularly in emerging countries like Cambodia, the arts are not high on the list of priorities, not only in the case of the Covid-19 pandemic, but also in times of peace.

“I'm well aware that the arts are not the number one priority in this country, much less in the Covid-19 pandemic. But think about it. What would we do without culture and art? What color would society be? Can we live in a society where emotions are blocked and are not allowed to be expressed?- Mr. Lyno's words overlap with those of Chancellor Merkel's.

“We may only realize the importance of what has been lost to us in these times, because the interaction between artist and audience generates a completely new perspective in which to look at our own lives. We become confronted with a variety of practices, we develop our own emotions and new ideas, and prepare ourselves for interesting debates and discussions. It allows us to better understand the past and to look to the future with a completely new perspective through art and culture.”('Bijyutu-Techo'website https://bijutsutecho.com/magazine/news/headline/21933)

“Artistic activity generates energy for human beings to have hope for the future. It is important for people and society to believe in the future and have hope for it”, Lyno says. We would like to firmly accept the message and energy emitted by each work.

Aya Kimura
Born in 1966 in Gunma, Japan.
After graduating from the University, he earned a master's degree in journalism from Indiana University. After working at the Yamagata and Yamaguchi bureaus of Asahi Newspaper, he was transferred to the Okinawa Times, where he has been a correspondent for the Asahi Shimbun's Asia bureau in Bangkok since 2000. She is the Publisher and Editor-in-Chief of the paper. She writes columns for the Asahi Shimbun Globe+ and other publications.