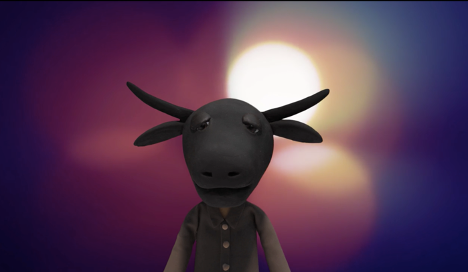 ”Flow” is a reflection of contemporary society not just in Laos but around the world, in which most people choose to forget their own identity and follow the herd. Mainstream society tells us that we should pursue material excess and keep up with the fast-moving modern world. People who think and act differently are viewed as strange, and feel pressured to conform.

I wanted the audience to see the clay figures used to create the animation, and so I decided to present them together with the video. By allowing viewers to walk around and see the objects from different perspectives, I think it also adds different meanings and emotions to the narrative.

Souliya Phoumivong
(Born 1983 Ban Kokxay, Laos / Lives and works in Ban Kokxay, Laos)
Animator and new-media artist Souliya Phoumivong initially trained as a painter and was a member of the first artist-run space in Laos. His practice underwent a radical shift in 2010 following a residency in Tokyo, and his works now encompass photography, video and claymation. He established the Clay House Studio in 2012 and was subsequently approached to create the first children’s television series in Laos, My Village, which ran for several seasons. As his practice has developed, Phoumivong’s studio and set designs have become more sophisticated, but he continues to retain a hand-made quality in productions. His recent video and installation works imaginatively combine filmed footage, stop-motion animation, and models made from locally sourced clay. He also teaches and mentors younger artists in film and animation.