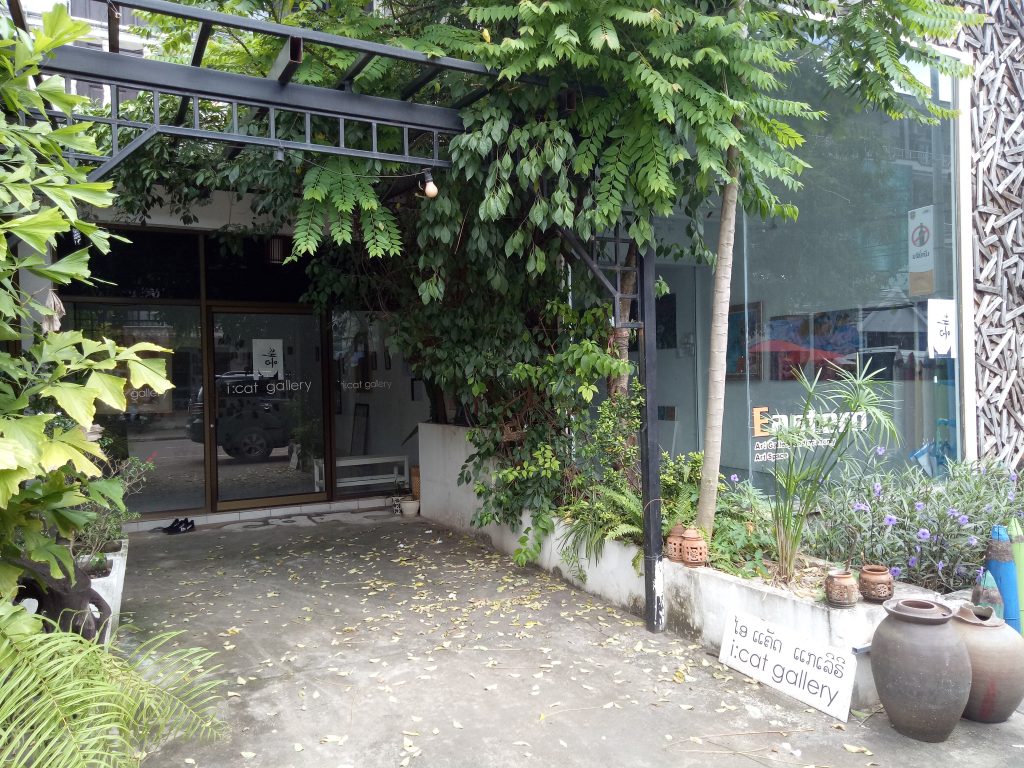 The entrance of 'i:cat gallery'

Said to have been built in the 16th century during the reign of the Lanexang Kingdom, there is a gallery just near Wat Si Muang. This gallery is 'i:cat gallery', which opened in 2009, and it focuses on contemporary art. The owner, Catherine O'Brien is from Australia and has been living in Laos since 2004 when she visited the country  as a project member to support arts education from Australia, which was being carried out in Asian countries and this is the reason for being in Laos.

On that occasion, her encounter with 'Treasure of Asia', a gallery that no longer exists today, marked a turning point in her life. She was struck by the splendor of the Asian contemporary art on display. "I can't explain it very well, but I felt these were a part of me", she says. She majored in Philosophy at college and had no previous background in the arts, but at any rate, she decided to open her own art gallery as if she was guided by something.

In i:cat gallery, the exhibitions of various contemporary artists' works from Laos and abroad are displayed. The appeal of Laotian contemporary art that Catherine discovered is the hidden messages that are not obvious at first sight. In other Asian countries, there are many which directly appeal to social messages such as political criticism and gender equality. On the other hand, in Laos, a socialist country dominated by one party, criticism of politics and political parties is taboo which may also reflect the national preference for euphemistic communication. She says that its indirect nature has a different charm from the art of other countries.

Gallery management in Laos appears to be tough. In this country, the poorest nation in Southeast Asia, with the exception of a few wealthy people, the income of the population is still low, and there is no culture for appreciating the arts, or paying for art. There are many devout Buddhists, and many Laotians spare no money on Buddhist paintings and Buddhist altar ornaments, and many of them are indifferent to common art. Without the concept of copyright, the idea that art is available for free is common.

When Catherine was asked, "What is i:cat gallery's role in such an environment?", after thinking for a while, she answered "It is a place for trying art." The i:cat gallery is a place where artists are able to connect organically, freely express what they want to express, and exhibit their works with their own sensibilities, and not those of the gallery's perspective.