Anchoring the residues of dispersed visions: the inner world of artist and poet Maung Day 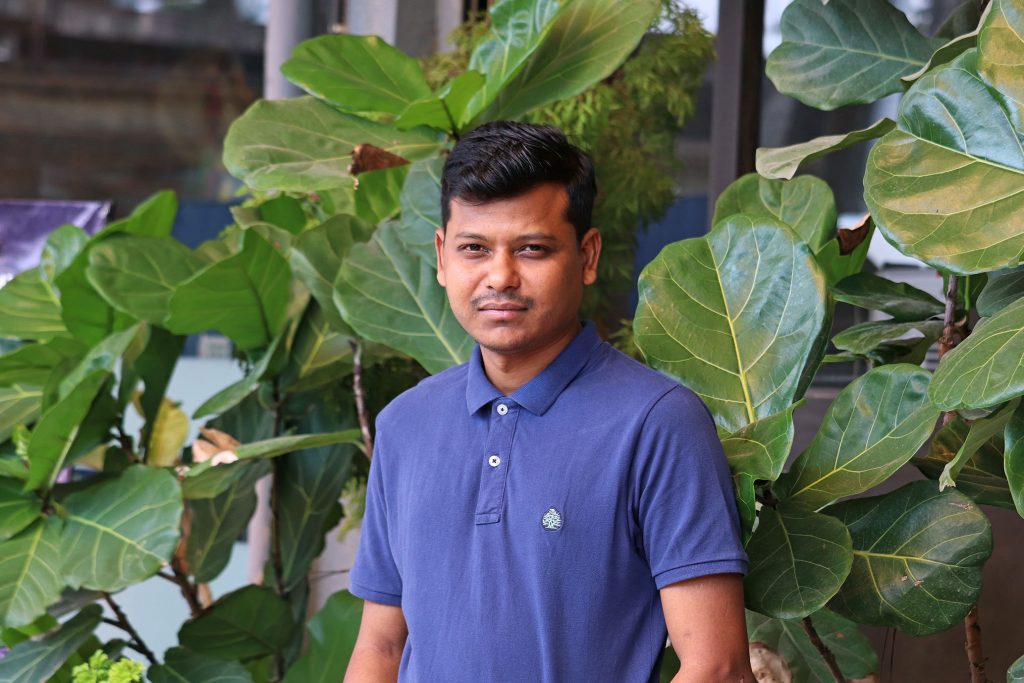 Raw and unvarnished, a sense of uneasiness almost always emanates from Maung Day’s drawings. Like the burs that cling to your clothes as you stroll through a meadow, or the mosquitoes that hover around your body by a pond at dusk, his work twines around your consciousness.

The 1980s in Myanmar was when artists were imprisoned one after another, having rebelled against power with their pens and paint brushes. Born in 1979, young Maung Day was a fan of cartoons and no more than ten years old at the time, constantly doodling in his textbooks.

Maung Day’s mother was a salesperson, and his father was an educator. He enjoyed drawing and writing poetry from early on, but majored in development studies in college and later became an engineer. “At the time, I was focused on making a living,” confesses Maung Day, sheepishly. Contrary to the eccentric personality I had imagined him to have from seeing his work, he was just like any other young man—perhaps coming off as slightly sensitive, with wrinkles between his eyebrows as he carefully chose his words.

Maung Day became serious about writing poetry and making art in 2006, at age 27. Like many artists, he created performance art pieces to slip by the strict censorship at the time, since the art form left no tangible traces. He was also involved in launching Beyond Pressure, a performance art event that originated in Yangon in 2008.

He then moved to Thailand in 2009, where he lived for seven years. While working for an NGO after he pursued development studies at Chulalongkorn University, he widened his sphere of activity in the arts outside of Myanmar.

Maung Day is renowned more as a poet than a visual artist. He has written many poems in Burmese and English, and published several collections of his poems. There are also publications that he is a part of as a translator.

In order to capture the random images that are released from the cracks of his consciousness, to anchor them to this world before they fade away, the most effective processes are writing poems to describe thoughts, and drawing to portray images. But why does he practice both, and how does he use them differently? He answered without hesitation.

“Poetry and drawing are two very different forms of expression to me,” he said. “I write my poems in both Burmese and English since I often present them in English-speaking countries, and perhaps because of that, I feel as though I am caught in the cultural framework of the West. Drawing, on the other hand, is much freer. I can simply spew out any image that comes to my mind without being bound to anything."

Maung Day’s drawings are often interpreted as political and social criticism. Father turned us into plants, for example, is themed around patriarchy.

The father sits to the right, mother to the left, and the son stands in the middle, surrounded by symmetrical and deceptively decorative features. The composition itself is that of a typical family photo in Myanmar, but look closer and you notice that the motifs drawn are actually quite strange. The father has a hairy body, and the heads of the mother and son are tree trunks. The laurel motif is in fact a pair of giant centipedes, and the family portrait is crowned with dogs in the middle of their sexual intercourse. Maung Day explains:

“Animals symbolize evil. The father is a beast who has turned his wife and son into mute plants.”

What appears to be a normal family, is in fact, in essence, as abominable as centipedes and copulation. The theme of patriarchy also stands for politics and society, or paternalism. In this piece, Maung Day condemns anything patriarchal as being repulsive.

Lord, I fished all night, but caught nothing is another piece interspersed with metaphors.

Everybody hides a different side of themselves in their minds, but sometimes that alter ego rises to the surface. Behind the boy’s head is a planet that represents his inner world. Does the title implicitly suggest that he will not escape from his other self, no matter how hard he tries to be good? Wait, what do the sparks on the left shoulder and fingers mean? Maung Day loved cartoons as a child—are these marks indicative of something? When I asked the artist, he responded with about three seconds of silence and said, “I don't know what they mean. The image simply came to me.”


The next piece, Kissers in the park, is one that involves color—an unusual choice for Maung Day.

According to Maung Day, the red thorny objects are bacteria, roaming around in the park and slowing eating into the lovers. Why did he apply the color red to this particular drawing? “I don't know,” he answered again. “The image of bright red bacteria just popped into my mind when I saw those two.”


The piece that the artist simply “did not know” what it meant, by far, was The market.

A man with a bag over his head, a male beast, vendors with their feet nailed down to the ground, and headless women floating in the air. These images were simply captured on paper as they bubbled up in his mind as he was gazing around the market. The drawing can be interpreted in numerous ways—a merchant who hides his true feelings, a villain who aims at prey, stallowners tied to their livelihoods, or the exploitation of working women. But isn't it the inner world of Maung Day, the very source that releases these chaotic images, that we must observe in this drawing?

There are two types of artists who are known as activists: one that carefully calculates and constructs the idea that they wish to convey, and the other whose work reveals a message without the artist consciously intending to do so. Sometimes the latter’s work is perceived as political or social, regardless of their intentions.

Maung Day overall gave eloquent responses to my questions, but it seems like he fits in the latter type. The inexplicable metaphors in his drawings seem to be the key to understanding—feeling, not comprehending—his work.

Drawn with pencil or pen on a white sheet of paper, the world of Maung Day is simple and achromatic. Something almost always oozes out from his drawings, graphically revealing a slice of his (sub)consciousness that constitutes him. The microcosms of his inner world are worth contemplating with every imaginative ability we can muster.