Tribute to the Artists of ‘Zomia’ 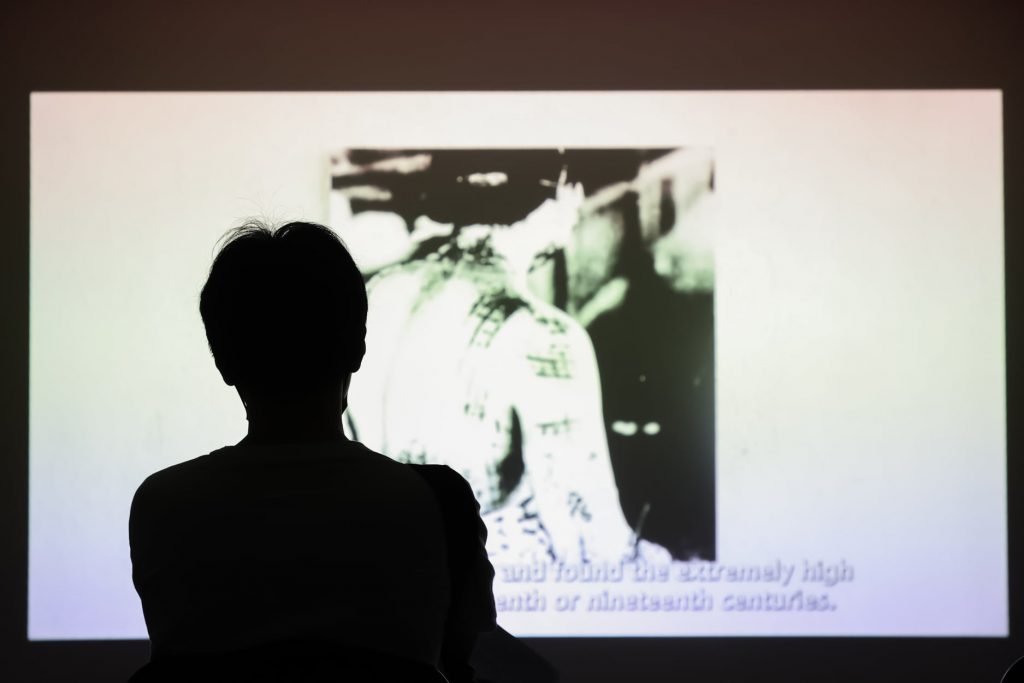 All images courtesy of the artist and Aura Contemporary Art Foundation

It's the middle of summer 2021 in Japan, suffocatingly hot due to the COVID-19 pandemic, Tokyo Olympics and, no doubt, global warming. In Osaka, a group exhibition of video art, with a seemingly “bizarre” title, is being held.

The reason for the description of “bizarre” is because of the title of the exhibition: “Zomi: Trans-local Migrants on the Water -Contemporary Art from the Mekong region-”, which includes the unfamiliar word ‘Zomi’.

The term ‘Zomi’ is used generically for people who live in ‘Zomia’, and the term ‘Zomia’ is used by the political scientist and anthropologist James C. Scott, who used it as a Japanese title for his book, to refer to the five countries of the Indochinese Peninsula (Vietnam, Cambodia, Laos, Thailand, and Myanmar) and the hilly regions of southern China. The Mekong River runs through the mountainous terrain of these six countries (‘Zomia’), so the term ‘Zomi’ refers to the people, or ethnic minorities, who have settled in this Mekong region.

As the title suggests, ‘Zomi’ means trans-local migrants, or displaced minorities, because they fled the oppression and persecution of the aforementioned countries and migrated to ‘Zomia’. If the state is the ‘imagined community’ as Benedict Anderson proposed, then can we not say that ‘Zomia’, where the Zomi live, is the real world outside of it?

In this sense, the Zomi lives in a globally unique environment. This is because ‘Zomia’ is located not so much on the frontier of the state, but outside it, beyond its control. However, the Zomi have not established a new state of their own. It is outside the states. In effect, they reside between the borders. In theory, however, there are no geographical or spatial gaps between the borders. The Zomi have chosen to form societies in areas that are outside the sphere of state rules.

Due to the political circumstances described above, ‘Zomia’ is a space outside the national order (laws and institutions imposed by the state), a lawless zone from the state's point of view. The emphasis on this lawlessness has led to ‘Zomia’ being ideologically associated with anarchism, and to it being seen as a haven for criminals, as one corner of the region is home to the ‘Golden Triangle’ – the infamous drug trafficking area.

But, ‘Zomia’ provides such geopolitical specificity, a safe and hidden place, for those fleeing the oppression of the surrounding state. This, and the cultural diversity and richness of the ethnic minorities who have made it their home, is what has brought ‘Zomia’ to the attention of the art world in particular.

Among the most recent events was the Asian Art Biennial in Taichung, Taiwan in 2019, entitled “The Strangers from Beyond the Mountain and the Sea”, which was a truly ‘Zomia’ themed exhibition.

Speaking of water, the Mekong River basin, the largest river in the Indochinese Peninsula, has seen a lot of power development over recent years, especially the construction of hydroelectric dams by China. There have been reports that this has led to an unequal distribution of the Mekong's water resources, due to the large amount of electricity consumed by the mining of virtual currencies and the hydroelectric supply from the dams that secure it. Liu Chuang's multi-screen video work “Bitcoin Mining and Field Recordings of Ethnic Minorities” (2018), which addresses this issue of power supply development, was exhibited at the aforementioned Asian Art Biennial.

In fact, a work related to the development of the river is presented in the exhibition “Zomi - Trans-local Migrants on the Water: Contemporary Art from the Mekong region". It is "My Grandpa's Route Has Been Forever Blocked” (2012) by the Thai artist Sutthirat Supaparinya. Set in the Ping River, which, like the Mekong, originates in ‘Zomia’ and runs north-south through Thailand, joining other tributaries to form the Chao Phraya River, the video depicts the reality of the dams that have deprived the river of its means of transport and circulation through their construction. The double screen image of the Ping River, with its various shifting currents and its stagnation (artificial lake), was moving and expressed the silent sorrow of the artist.

The exhibition, “Zomi- Trans-local Migrants on the Water: Contemporary Art from the Mekong region”, is part of the “Semba Art Site Project Vol.01” and is being held in a building in Semba, Osaka.

However, why is ‘Zomia’ associated with Semba, Osaka? The reason is the theme of the exhibition, ‘Watery Zomia’. In a statement about the exhibition, Mr. Yabumoto, the organiser and a representative of the Aura Contemporary Art Foundation, which collected all the works on display, says: “The Mekong’s mountainous region is connected by the Mekong River to the fertile Mekong Delta, to the sandbar, and finally to the sea, and from the sea to Osaka”. In other words: The Mekong Delta of the Indochinese Peninsula is linked to Osaka (Semba, the centre of the delta), “a delta formed by the Yodo and Yamato Rivers”.

Therefore, the exhibition will probably provide an opportunity for both a discovery of the rare story of the Indochinese ‘Trans-local Migrants on the Water’, and a journey that confirms the cultural similarities between the Mekong Delta and the Osaka Delta. However, there was only one work on display that made a direct connection between Indochina and Japan. That work was “Golden Teardrop” (2013) by Arin Rungjang, exhibited in the Thai Pavilion at the 2013 Venice Biennial. The work is a video accompanied by an installation of golden teardrop objects that beautifully decorated the space. In the film, a Japanese woman from Osaka who lives in Thailand, reflects on her life while making a traditional Thai sweets called ‘Thong Yod’. The complex history of Thailand, the only country in Indochina that has never been colonized, and the dedicated life of the woman who unexpectedly became a bridge between Japan and Thailand, were impressive.

In the exhibition space, several video works were projected on the subject of the Mekong River, the main topic of the exhibition. In Cambodia's Khvay Samnang's “Popil” (2018), the river is the backdrop for an intertwined dance of two figures wearing masks woven from vines that were used for fishing. Samnang, who created this video, is the artist of “Preah Kunlong (The Way of Spirit)” (2017), which had the biggest impact on me at Documenta 14 in 2017, when I was surprised to find such an amazing artist in Cambodia. He is also a member of the Sa Sa Art Projects, a world-renowned Cambodian artist-run space, and another member, Lim Sokchanlina, was also present at the exhibition.

Sokchanlina's “Letter to the Sea” (2019), exhibited at the 2019 Singapore Biennial, is set not in a river, but in the sea, where the artist himself appears to tell the tragic story of fishing migrants who are fugitives from the plains (cross-border migrants). It dissipates as a bubble rising from Sokchanlina on the seabed. Doesn't the painful lament of the Zomi, the victims of crossing the border from Cambodia to Thailand, reach the ground?  But at some point the bubble reverses and returns to the artist. Time is reversed. The tragedy of the Zomi will be engraved in the artist's heart and will be talked about forever.

Returning to the Mekong River, the Cambodian sisters Mech Choulay & Mech Sereyrath capture a woman performing in the Mekong Delta in their work “Mother of River” (2020). Wearing a long red cloth around her body, she struggles to find and create something (and eventually gives birth to soil). Against the backdrop of a city full of buildings, the film evokes a sense of nostalgia for what is being lost. Furthermore, there is a sense of urgency. It is natural to be lost in the rapidly modernizing countries of South East Asia, and it is a warning that this is the result of man's destruction of the environment today. This is clearly expressed through the gestures of the performance.

Samak Kosem is a Thai anthropologist whose work focuses on the Muslim communities of Thailand's deep south (near the border with Malaysia). In his work “Sheep” (2017-2018), he filmed the behavior of this domestic animal. As you can see from the video, the sheep are not anthropomorphic. They are not a human parable. The sheep are just sheep. There is no magic that can transform them into human beings. But we can empathize with the sheep. The sheep are not human beings, but human beings become sheep（animal).

People who have become the domestic animal will obey the commands of power, as in the clay animation “Flow Vol.1” (2018) by Souliya Phoumivong from Laos. The states of the plains enforce it. This is all the more so, given that most of the countries in the Mekong region currently have such a strong or authoritarian state system. This may lead to an increase in the number of people fleeing (taking refuge) in ‘Zomia’.

In this case, the schizophrenic digital image of a woman in Vietnamese artist Ngoc Nau's “She Dances for Desire” (2017) will lead people to the real Zomia between borders, drawing a ‘line of escape’.

Finally, I would like to express my opinion on the ‘re-magicization’ of art raised by Yabumoto, quoting Serge Latouche in “Degrowth”. Perhaps the most magical image in the exhibition is Myanmar's Maung Day's “Blood Flowers” (2018). In an interview, he offers a sober reflection on surrealism and conceptual art. He is well aware of how witchcraft works in Western art. In other words, the West has demystified art and created modern art, but there was still a magical element (the conscious utility of the unconscious) in it. The West, by escaping magic, became the epicentre of modern art, well before the rest of the world, but it was not completely free of magic. By forcibly denying it, art in the West has since declined, and there is now no longer any great work coming from the majority of the artists in the West.

So, do we need to be re-magicized? I don't think so. It is important to recognize that there is magic in non-Western (Indochinese and Japanese) art, just as Maung Day recognized that there was magic in Western art (hence not‘re-magicizing’ it). This awareness is not the same as naively believing in magic and making it a principle of art. On the contrary, it is knowing that there is a magical element in art and appropriating it for criticism. To paraphrase Bruno Latour's discussion of the “On the Modern Cult of the Factish Gods”, it is to practice the worship of ‘magical facts’, as he did. It is an effective way to criticize ‘reality’ (the flatland state) through being aware of the fact of magic by the artists of the Zomia from mountains and water. It is precisely this magic, like the fences in the South-East Asian landscape that appear in the photographs of Lim Sokchanlina's “WRAPPED FUTURE II” (2019), that makes it easy to see beyond the shielded development.

Kentaro Ichihara
Japanese art critic, Kentaro Ichihara has been writing for exhibition catalogues and contributing to various media since the 1980s. He is the author of “Mike Kelley: The Anti-Aesthetic of Excess and the Supremacy of Alienation” (1996), “Gerhard Richter: Paintings of Schein” (2002), “After the Reality: Art after 9/11” (2008), and “Dictionary of Contemporary Art” (co-authored, 2009). He is currently working on his own website, Art-in-Action (http://kentaroichihara.com/), as well as viewing contemporary art from around the world with the aim of providing a comprehensive overview of contemporary art.